The world-famous economist is notable for his crypto bearishness. Just check out just a handful of his New York Times headlines...

"How Crypto Became the New Subprime" and "Crypto: Is This Time Different?"

So, it's not hard to tell where Krugman stands on digital assets. He's pointing to the current slump and, at least in the editorial sense, driving nails into crypto's "coffin."

To be fair, Krugman's been right about the last three crypto downturns...

...but he's absolutely missed the boat when it comes to the incredible bull runs that come afterward. Investors who've been following along would have realized approximately... zero gains.

But then again, he's an economist - a Nobel Prize-winning economist, sure, but, unlike us, he's nowhere near the trenches on this thing.

I've got to set the record straight.

So let's unpack what Paul Krugman's saying here and take a look at how it actually points the way toward crypto profits for investors who take the long view and keep the big picture in mind...

What Krugman's Just Not Getting

Like I said, Krugman's an interesting guy - very intelligent, very well-educated, but sometimes misguided. He certainly is here.

What he's missing - he and a lot of other pundits proffering opinions on the cryptosphere - isn't that Bitcoin is digital money, too.

He's right when he says the money in his bank account is also digital money. But he's being a little disingenuous, only telling half the story.

Because the truth is anything that extinguishes debt is money - $30,000 in your bank account, $30,000 worth of Treasuries, pesos, pounds, even seashells. That's money.

So what Krugman and others are missing here is that... well, a good chunk of the population is completely mistrustful of the system of fat cats and plutocrats who, since forever, have been telling us where, how, and in what form we get to hold value.

In other words, the decentralization of Bitcoin and other crypto has immense value in and of itself.

To coin a phrase - "It's the decentralization, stupid!"

There's no middleman like Visa taking a fee for Bitcoin transactions. It doesn't take weeks, or even days, to settle up the way a fiat currency transaction might at a bank.

There's also no central bank driving Bitcoin off a cliff, like the dollar. I certainly don't trust unelected government "economists" to manage the value of the "currency units" in my bank account. Hell, even at their agreed-upon, 2% inflation target, my buying power gets cut in half every 20 years.

It's worse elsewhere in the world. There's no dictator imposing capital controls on Bitcoin, or seizing it when you try and take it across the border, like the ruble.

And if you're reading this, you probably feel the same, so like me, you've transferred some of your precious, hard-won wealth into a "dissenter-mediated" system of currency that can move as fast as a text message and enjoys virtually unbreakable security. 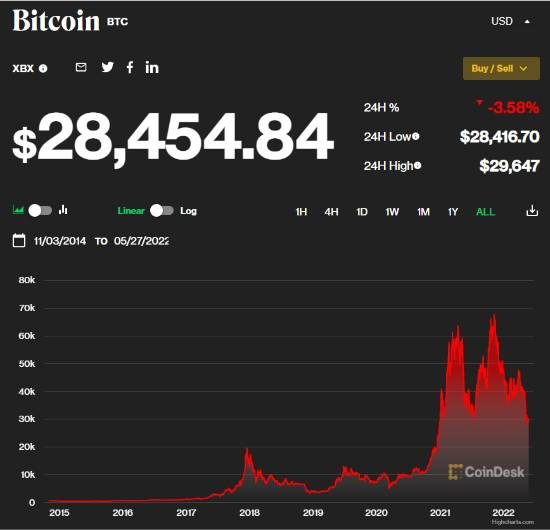 The big, central proposition - the bet - with Bitcoin and cryptocurrency as a whole is the algorithmic integrity it provides us with is worth more than the lack of integrity of government policymakers. That's a bet I'll take all day, every day.

The skeptics, the Krugmans of the world, seem to have the upper hand right now. But the truth is, all they're doing is handing us beautiful entry points.

Hang in there, and build your position in the quality tokens we talk about all the time, like Cardano (ADA), Bitcoin (BTC), and Ether (ETH). Dollar-cost averaging in at these prices is the best way to lower your cost and maximize your gains. Oh, and keep the big picture in mind - it looks a lot like that long-term chart right above.

When the inevitable happens and the crypto market bounces back, you're going to want to make sure you have a crypto portfolio with the best potential to make you life-changing wealth. That means owning BTC and ETH, certainly, but they aren't the only tokens out there.

In fact, there are a handful of smaller coins that you can get for pennies on the dollar compared to Bitcoin but have a much higher potential for huge gains. Some of the returns we've seen on these blow the stock market and the "mainstream" cryptos away, and have the potential to wipe the floor with BTC ten times over in the next year or so.

You can get all the details here...