In the late 1990s, the Dotcom Bubble burst. This destroyed the Internet forever and nobody ever did anything online again.

Wait, no - we all practically live on the Internet 24/7 these days, and we did even before Covid hit. It turns out the Internet was actually a really great idea that makes things way easier than they used to be.

Crypto and the blockchain will, mark my words, turn out to be bigger than that. It's hard to see right now, but I believe it.

Turns out the mainstream feels differently. The respected Bankrate annual survey just dropped, and it shows as many as 75% of Americans are "uncomfortable" with crypto, and no longer see it as a "long-term wealth generator."

People felt the same way about Amazon.com after the 2000 crash, when it was trading, split-adjusted, for less than a buck.

Maybe the stream of bad news over the past few months has you feeling less-than-bullish on crypto yourself?

So, I'm going to take some time to get into this "prestigious" survey, because it gets to the point of what I've been saying for a while now...

What the Bankrate Survey Says - And What It Doesn't

This past week's survey suggests around 75% of Americans are "uncomfortable" with cryptocurrencies and "skeptical" of its suitability as a long-term wealth generator. Interestingly, the survey lists real estate - for the third time in four years - as Americans' favorite long-term investment.

Ask anyone who's tried to buy a house over the past three or four years what they think of real estate.

Maybe the mainstream doesn't realize the frothy real estate market is topping out - or they'd forgotten the time real estate essentially wiped out $6 trillion in wealth and torpedoed the global economy. As painful as the crypto retrenchment's been, it'll never be that bad.

So why are idiotic talking heads saying that crypto is dead? And why is the public swallowing it? Well, the mainstream investing consciousness is kinda like algae. It just grows towards the nearest source of light.

And crypto's getting a lot of bad press right now, hot on the heels of an all-out media sunshine blitz. In the past 18 months, crypto's broken through into the public consciousness, going from something barely anyone outside of enthusiast groups had even heard of to something that's getting Superbowl commercials, stadium naming rights, and A-List celebrities demanding people invest.

Nothing in the world could ever hope to live up to the unrealistic expectations that hype blitz created. But as long as we keep our own expectations sane and grounded in facts, we're still going to be the ones making money in the end.

Step one to setting those expectations is pointing out that only 14% of the discomfort Bankrate "uncovered" is actually new. It was 61% last year. As ferocious as the 2020/2021 hype machine was, cryptocurrency hasn't yet been at the point where a majority of Americans are ready to accept it as a mainstream investment. The word is out, and it's still out. The shock will wear off, and eventually the mainstream market will get the message.

I stress this again: Cryptocurrency is going to come back - different, better, and even more refined. I wouldn't be renewing any memberships to the Bored Ape Yacht Club, but new projects with solid teams behind them and solid use cases are going to be better with all the speculators, the bad ideas, and the weak money chased away.

It's like I've been saying, we're in the very early innings of cryptocurrency hyperadoption. Crappy projects and bad ideas are going to crash and burn, good riddance to them all. That's the way free markets are supposed to work. Celsius and 3AC - and the idea that you can just lend money and throw it around with zero regard for risk, or have a stablecoin backed with no cash - can go relax in the trash can of market history along with WebVan and SpiralFrog.

And if you've never heard of those companies before, well, in ten years, nobody will have heard of TerraLuna either.

Let's Look at the Facts and Look Ahead

It's a tough time in the market, but what does that really mean?

Well, Bitcoin (BTC) has lost about 70% of its value since its November 2021 all-time high. That's scary until you remember we've been here before, and come away each time stronger and wealthier.

I mean, by the start of 2017, Bitcoin had never been worth more than $1,000 per coin, but by the end of that year, it was pushing $20,000. Then it crashed to less than $4,000. Ultimately, what that means is there are a lot of investors out there who's cost per Bitcoin is less than $500 - anybody who bought in before the rally started shouldn't be complaining. 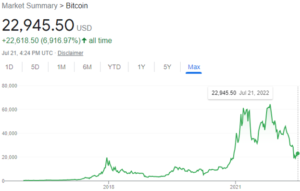 Bitcoin bottomed out around the end of 2018, so that's about a triple in less than two years. Stock investors were averaging about 10% over that timeframe. So, if you can manage not to get starstruck by the vertical lines, you can see clearly that we're still looking at an outstanding way to make money.

In fact, the bottom these days is above where the peak was in 2017, around $20,000. We're still talking about a real asset that's come up 169,000% in a decade. Forward-thinking investors realize Bitcoin and crypto have made tremendous progress, and that progress is here to stay.

Bottom line is, the current crypto market downturn is an opportunity, not a crisis. This is the perfect time for investors to establish or strengthen their positions in digital assets.

But you don't have to take just my word for it.

In fact, there's a Wall Street insider - famous for being a conservative investor - who's even more bullish on Bitcoin than I am. For a long time, he was a huge crypto skeptic, but now he's saying it's the best investment opportunity to come along in the past 30 years.

Skybridge Capital's Anthony Scaramucci has a bold Bitcoin price prediction that's been making headlines, and you can see it right here, along with his advice on what every American should do right now...