If you've bought gas in the past few months, you've felt the surge in fuel prices firsthand, pushing the cost of generating energy, transporting goods, and driving through the roof. In fact, energy costs are the main contributor to the record 9.1% inflation rate in the United States today.

Similarly, the War in Ukraine and the sanctions levied against Russia by the U.S. and Europe make clean energy technology an increasingly important priority for policymakers. Russia is the largest exporter of oil to global markets, and it supplied 32% of Europe's natural gas needs in 2021.

As a result, policymakers are urgently trying to reduce dependence on Russian energy and increasingly paying attention to clean tech like solar, wind, and hydroelectric. In fact, there's a major new bill on the Senate floor that plans to invest $379 billion into climate and energy spending throughout the next few years.

I think there will be a lot more money where that came from, and investors who act now can potentially bank profits on this trend.

But some approaches will be more lucrative than others. You could invest in a clean energy ETF like iShares Global Clean Energy ETF (NASDAQ: ICLN). It's up 3.6% YTD, compared to -13% on the S&P 500. Not bad.

But the real money is in private equity - investing directly in the companies leading the clean energy charge and poised to skyrocket in the years ahead. This is an extremely hot field right now for startups, with billions of VC dollars going into the space.

I think investors like you need to join them. Here's why...

I've told you before about my excitement for the trillion-dollar opportunity in clean energy, but it's only become more pressing throughout 2022.

Apart from turning energy production green, we're also at the beginning of a long-term trend toward electrifying transportation globally.

In fact, a recent article in Bloomberg suggests we've already seen the peak of the internal combustion engine (a.k.a. an engine that burns fuel for power). Quietly (literally and figuratively), electric vehicles are starting to make up a larger and larger share of new car sales. Meanwhile, electric buses are being deployed in cities globally, and a few different startups and corporations are researching how to electrify aviation. 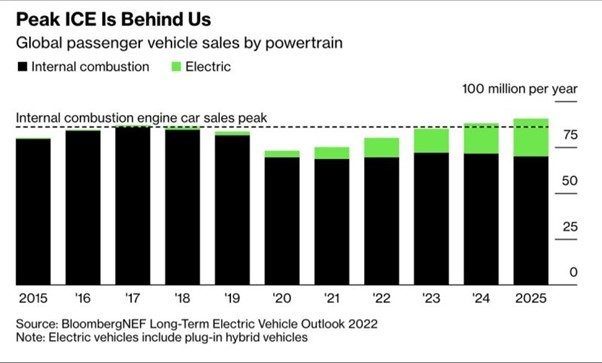 With all these positive tailwinds behind clean energy, it's no wonder we saw $19 billion of VC investment across more than 500 clean-energy startups in the first half of this year. The sector is hot - and it's staying that way.

Like clean energy, the manufacturing sector is experiencing increased momentum due to geopolitical competition between the United States and China. For the past few decades, China's been the factory of the world, producing iPhones, fridges, t-shirts, pans, and every other good you can imagine.

However, tensions have risen between the U.S. and China since the Trump administration imposed wide-ranging tariffs on Chinese goods, kicking off a trade war that's continued ever since. Well, the Biden administration not only maintained much of the Trump-era policies imposed on China, it broadened them in many areas. As a result, tensions between the U.S. and China are currently at unprecedented levels.

This puts the supply chains of most businesses at risk of disruption if things escalate further. Today, business leaders across the nation are increasingly focused on moving manufacturing out of China and back to U.S. soil - also known as "reshoring." In fact, the most recent public earnings reports saw record mention of the word "reshoring."

I've personally invested in many companies that sit in and around this trend, including Relativity Space, a startup that designs and builds space-launch rockets for the U.S. private sector and military. For many years we depended on Russian rockets to launch our astronauts and packages into space. Startups like Relativity Space and SpaceX are changing that.

"Made in America" is the new phrase on the tip of every business leader's tongue, and clean energy is top of mind for every policymaker. As investors, we should pay very close attention to those facts and build our portfolios in 2022 and beyond accordingly.

A lot of investors have been hit hard by market volatility this year, and it's understandable that many people want to find safe havens for their money amidst all this chaos.

One thing to remember is this: some of the biggest companies in the world began as startups during the most volatile markets imaginable. Microsoft, IBM, General Motors ... all worth billions today ... all born during the worst recessions in history, and all made their early investors very rich.

For generations, America's wealthiest investors have turned to angel investing to weather tough markets. Now even regular investors can get in.

Get all the details here...