In an exclusive interview with Jim Rickards, learn about the warning signs of the coming Great Depression and how you can protect yourself before it is too late.

This really speaks to what you wrote about in your new book, The Death of Money, the title strongly alludes to this, the hourglass is now empty.

That the stock market could plunge overnight 70%.

You know, when I use the phrase 25-year depression, it sounds a little extreme, but historically it's not.

We had a 30-year depression in the United States from about 1870 to 1900. Economists actually call it the Long Depression.

The U.S. is in a Depression Today.

A lot of folks might disagree with you that we're currently in a depression.

That word brings to mind images of the 1930s and soup kitchens.

Well, we have soup kitchens today…

They're just at Whole Foods and your local supermarket, because 50 million Americans are on food stamps.

It's not that we don't have distress.

We have enormous distress, but it's being hidden in different ways.

The unemployment rate today is actually 23% when you calculate it the right way. 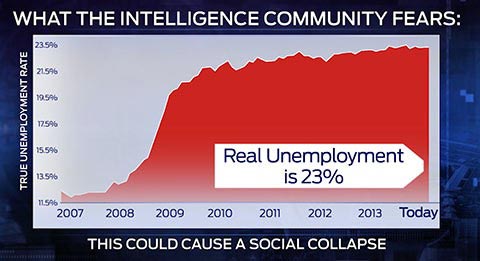 And you point the finger right at the Fed, Congress, and the White House.

JIM RICKARDS: I was in a meeting in the Treasury and I said:

"The Fed and the Treasury are the greatest threats to national security, not Al- Qaeda."

Right here in this building with this group…

You people are destroying the dollar and it's just a matter of time before it collapses.

And I testified before the United States Senate about this. 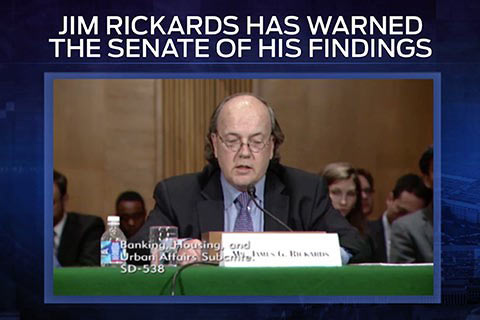 I warned the Senate, maybe we can't stop earthquakes on the San Andreas Fault…

But nobody thinks it's a good idea to send the Army Corps of Engineers out there to make the San Andreas Fault bigger.

But by money printing, credit creation, and reckless monetary policy by the Fed, we're making the San Andreas Fault bigger every day.

And when you make a complex system bigger – the risk doesn't go up a little bit – it goes up exponentially. So the risk is unimaginable at this time.

The collapse hasn't happened yet, but the forces are building up and it's just about to snap.

Jim, your take, and that of many in the Intelligence Community…

Is much different than what we're hearing out of Capitol Hill.

Which is why the allegations you make in this book are causing quite a controversy in Washington.

I was at a recent conclave in the Rocky Mountains with a couple central bankers, one from the Federal Reserve and one from the Bank of England.

And I was handed a copy of Janet Yellen's playbook.

The Fed is trying to kind of use propaganda…

Lie to us about economic prospects, talk about green shoots, use happy talk to try to get us to spend our money.

The Fed doesn't know what they're doing.

Don't ever think that they know what they're doing.

You can print all the money you want, but if people are not borrowing it, if they're not spending it, then your economy is collapsing, even with money printing.

So you can understand it this way…

Let's say I go out to dinner and I tip the waiter.

And the waiter takes my tip and he takes a taxicab home.

And the taxi driver takes the fare and puts some gas in her taxicab.

Well, in that example, my dollar had the velocity of three.

$1 supported $3 of goods and services: the tip, the taxi ride, and the gasoline.

But, what if I don't feel great? I stay home, and watch television.

I don't spend any money.

Well, that money now has a velocity of zero.

I leave my money in the bank, but I don't spend it.

A Great Depression and the Velocity of Money

Let's look at what's actually happening with the velocity of money.

It's plunging… It's going down very rapidly. 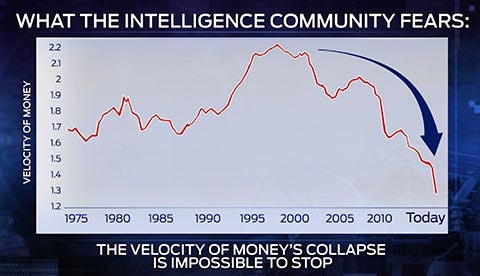 But compare this decline of velocity today to what we saw leading up the Great Depression.

Now, in the depths of the Great Depression velocity was even lower…

If you compare what's going on today to what happened in the late 1920s just prior to the Great Depression, there's a very striking resemblance. 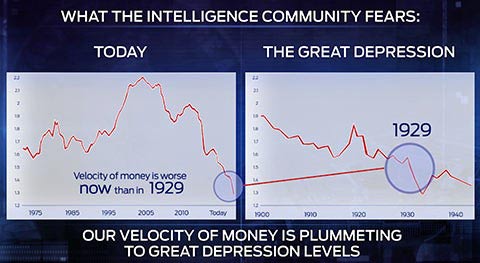 So, it doesn't matter how much money the Fed prints.

Think of it as an airplane that's coming in for a nosedive.

It's crashing… crashing… getting closer to the ground.

But, unfortunately, it's not working, we're heading for a crash.