Recently, all 16 branches of our Intelligence Community have come together to release a shocking report.

These agencies, that include the CIA, FBI, Army, and Navy, they've already begun to estimate the impact of the fall of the dollar as the global reserve currency.

And our reign as the world's leading super power being annihilated in a way equivalent to the end of the British Empire, post-World War II.

And the end game could be a nightmarish scenario, where the world falls into an extended period of global anarchy.

In an exclusive interview with Jim Rickards, learn about the warning signs of the coming Great Depression and how you can protect yourself.

STEVE MEYERS: In the early '80s, you were a member of the team that helped negotiate an end to the Iran hostage crisis.

In the late '90s, when it was discovered that the Wall Street firm Long-Term Capital Management was about to cause a total collapse of the financial markets, the Federal Reserve had to turn to you in order to stop this catastrophe from plunging America into a recession.

And then, after 9/11, you were tasked by the CIA with investigating potential insider trading that took place prior to the terrorist attacks.

The problem was the CIA didn't have any capital markets expertise.

And why should they?

Prior to the beginning of globalization, capital markets weren't really part of the battle space.

So the CIA engaged in some outreach, they recruited certain people, myself included, to bring the Wall Street expertise to the agency. This Led to Project Prophecy

So, what the CIA said was, well, if there's going to be another spectacular attack…

Using price signals to determine the actions of participants in the market, whether it be terrorists, or strategic rivals of the United States…

Could you spot it?

Could you get the information, and actually break up the plot, and save American lives?

STEVE MEYERS: This system you built with Project Prophecy actually predicted a terrorist attack that was thwarted in 2006.

She said, "Jim, we've got a bright signal on American Airlines. It looks like a possible terrorist attack."

I was up at 2:00 in the morning in my study, watching CNN, and all of a sudden MI-5 and New Scotland Yard emerged to break up this terrorist attack.

They were arresting suspects and removing files.

So this showed that the system worked.

However, it's not just good for predicting terrorist attacks, but also strategic attacks by rivals and enemies of the United States.

STEVE MEYERS: For years now, you've been helping the Pentagon and CIA prepare for a rise in asymmetric warfare and financial threats, because today there are immense fears we'll be struck by – as you've described it before – a financial Pearl Harbor.

Historically in Washington, the Treasury and the Fed take care of the dollar.

The Pentagon and the Intelligence Community take care of other threats, but what happens when the dollar IS the threat? 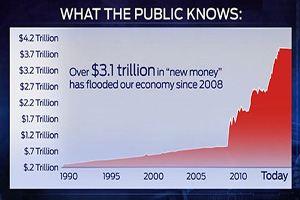 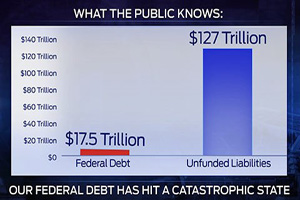 You go through the whole list and it goes on and on and on.

There's no way to pay it.

Debt can no longer be used to artificially grow our economy.

So that was pretty good bang for the buck.

But by the "stagflation" of the late 1970s that relationship had actually collapsed.

You know what that number is today? Today, we only get $.03 in growth for every $1 of debt.

So we're piling on the debt, but we're getting less and less growth.

It's soon going to go negative.

This is a signal of a complex system about to collapse. 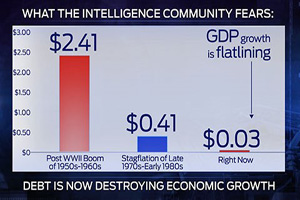