It may seem like panic in the stock markets just started this month, but the truth is governments and central bankers have been in "panic mode" since March.

We just didn't see it in the markets until a few weeks ago.

But if you look back, you can tell central bankers were panicking because they kept intervening to manipulate their stock or currency markets.

Here's a quick play-by-play of those panic attacks and the real messages behind them:

Translation: "Emergency! We have to do something about that "strong yen" or else Japan's economy is doomed."

Translation: "This "strong franc' is killing us. Before long, no one will be able to afford our chocolates and fancy watches. We've got to do something. Let's try shooting this "final bullet' in our gun and see if that works." (And, unfortunately for Switzerland, it didn't.)

Translation: "Ok, now we're desperate. We've got to see this yen turn around or we're toast!"

Translation: "We need to throw Italy and Spain a bone, even though we don't have enough firepower to bail out Italy like we bailed out Greece. But we'll put on our best poker face and try."

Translation: "Um, well we have to do something -- let's announce we're keeping rates low. We were going to do that anyway."

Translation: "Well, we've tried everything else, let's say everything is fine to calm the markets down! Then we can always dive into QE 3 next month or the month after if things get really bad!"

Did any of these emergency moves actually work? Did central bankers manage to stop volatility in the markets?

In fact, they made it worse. Investors have finally sensed panic from the guys in charge. That's why so many stock and currency traders keep hitting the sell button and dumping all their holdings.That's why the Dow Jones Industrial Average earlier this month lost all its gains for 2011 in a matter of days.

That's also why stocks dropped immediately following the Fed's announcement that rates would stay steady until 2013.

It's not just the United States, either. Stocks in Europe, Canada, and even Asia also have fallen off a cliff recently.

And this is just the beginning...

Central Bankers Will Continue the "Trend of Intervention"

The Fed is at the point where it has to do something.

With all of these unusual moves unfolding in the markets, the heat is really going to be on the central bank to perform a miracle to calm the markets once again.

The Fed doesn't have the luxury of cutting rates any further, and it's planning to keep rates low for the foreseeable future.

So that only leaves one option: quantitative easing.

Everyone will be pressuring U.S. Federal Reserve Chairman Ben S. Bernanke and his team to intervene with another round of quantitative easing. It's a done deal considering U.S. stocks erased all their gains for 2011 in a matter of days.

Some way, somehow, the Fed will have to push up the liquidity in the markets. That means running the printing presses and again creating more money to bail out the stock market.

It may or may not be called "QE3," but in essence, that's what it will be. 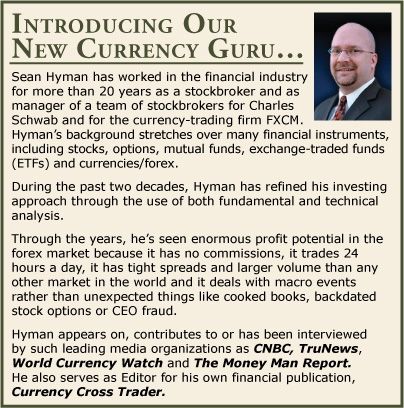 If it gets bad enough, U.S. central bankers may have to call on other Group of Seven (G-7) nations to help bail it out. The G-7 has already pledged to step in if global stock indexes continue to fall off a cliff.

The continued money printing - paired with the slap in the face from Standard & Poor's U.S. credit rating downgrade - means the dollar doesn't stand a chance in the long term.

Everyone views the U.S. dollar as a safe haven in times like this, but a few months or even years down the line, the dollar - and anyone who holds dollars - will pay the price for the Fed's actions.

Meanwhile, riskier currencies like the Aussie dollar will finally get another nice bounce higher as the dollar starts to fall.

The Good News Behind the Fed's Moves

These quantitative easing Band-Aids will only last for so long.

I still believe we're heading for a major stock market collapse. We may not even see the big crash this year, but it's coming. It will happen because the Fed can only pour so many trillions of dollars of assets onto its books before it all caves in.

When that happens, foreign investors will finally back away from the U.S. markets. Investors will turn to the greener pastures of China, Singapore, Norway and Switzerland as they shake the dust off their feet and leave the United States.

But in the meantime, I take some comfort in the fact that all these emergency interventions are creating some impressive volatility out there in the markets.

For a f orex trader, volatility is absolutely essential. To trade currencies, you need the market to trend up or down - that's when you catch the best profit moves.

And in this type of market, there are plenty of trading opportunities if you know where to look.

In the next couple weeks, I'll be introducing you to various ways to find these opportunities here in Money Morning.

[Bio Note: With the outlook for the dollar and the euro growing increasingly bleak, many readers have asked us about currency trading. So we decided to respond by bringing on a new currency expert - Sean Hyman. Hyman is a veteran currency trader with more than 20 years of experience. He also currently serves as Investment Director for World Currency Watch. Watch for his columns on currency trading in Money Morning.]

"This "strong franc' is killing us. Before long, no one will be able to afford our chocolates and fancy watches. We've got to do something. Let's try shooting this "final bullet' in our gun and see if that works." (And, unfortunately for Switzerland, it didn't.)
Hello Sean,
You had better be a little attentive to what really happened. On August 3, eur chf weas around 1.07 and something, agreed, it dropped to 1.0070 afterwards. But doday we are a 1.18 roughly, give or take a few pips. Agreed, it may not – and most likely is not – over alltogether as of yet. But as a currency specialist you should be aware of a few technical analysis and should have seen that the DMI both in weekly and monthly charts EUR CHF and USD CHF were widely over-extended. A reaction had to come and it did. To my humble opinion – and to my experience dating back to 1971 when I started forex trading in a bank – we most likely will see some range trading for quite a while in eur chf and usd chf, 1.14 – 1.20 in eur chf and 0.75-0.85 in usd chf. History has shown that the initial down trend will probably prevail, mainly as long as US fiscal and monetary policy remains as irresponsible as it has been since 40 years (to the notable exception when Paul Volcker was at the Fed's helm). You should also remember the "Plaza agreement" in 1985, when Ronald Reagan asked the whole world to get the Dollar down. To no surprise, the US have used and abused of their privilege of being a reserve currency issuer, and still are. The Swiss are too small to call the shots, but China might well one day force you back on a different path. The US privilege of the past has become a curse for the US, and someone, more powerful will take care of it!