The market's recent 45-day rocket ride was the longest uninterrupted climb without a triple digit decline since 2006 - until Tuesday when the Dow lost 203 points.

The sell-off begs the question: Should you buy the stock market dip?

First things first. The sky isn't falling even though there are a lot of investors who believe the worst after two tough days on Monday and Tuesday.

In fact, if you remember your recent history, we used to eat declines like these for breakfast. Two-hundred-point days were not uncommon. For that matter, neither were 400-point swings only a few years ago.

What investors need to realize is this: The stock market has come a long way in a hurry since establishing panic-driven lows on March 6, 2009.

The S&P 500, for example, has tacked more than 100%. Compared to those gains, Monday and Tuesday's losses are just rounding errors in the big scheme of things.

On that basis alone, I could make the case this is the pullback everybody has been waiting for.

But that's the problem...everybody is waiting on the same thing.

Waiting for a Stock Market Dip

According to various reports, most investors remain on the sidelines for reasons that are as obvious as they are self-evident - worries about debt, politics, jobs and the future dominate nearly every poll.

You can see that if you look at stock market volume.

It's down 50% since the financial crisis began. According to CNBC data, last Friday a mere 3.2 billion shares traded hands on the NYSE. Three years ago, that figure was 7.5 billion on an average day.

This complicates technical analysis because it limits the statistical validity of many analytics that might otherwise be functioning normally.

So what's a technical trader to do?...

The same thing they would normally do: Look to the past in an attempt to identify distinct patterns that have high odds of repeating themselves in the future.

The key in today's markets is the time frame.

In an attempt to discern what's happening when the markets go south, most traders begin turning to smaller chunks of data dropping from daily charts into bars of 1 hour, 30 minutes, 15 minutes, or even tick-level data.

What you actually want to do is go to a bigger time frame like weekly charts. That helps you get rid of the noise and see the forest for the proverbial trees.

If you change the S&P's chart from a daily to a weekly as I've suggested, you can see some pretty nice similarities between the upside move that began in July 2009 and the run that's underway now.

There's a rally that took us higher into April of 2010 and a summer correction that returned us to July troughs. Technicians refer to this as a cyclical bull market within a secular bull market.

Here's where it gets interesting. 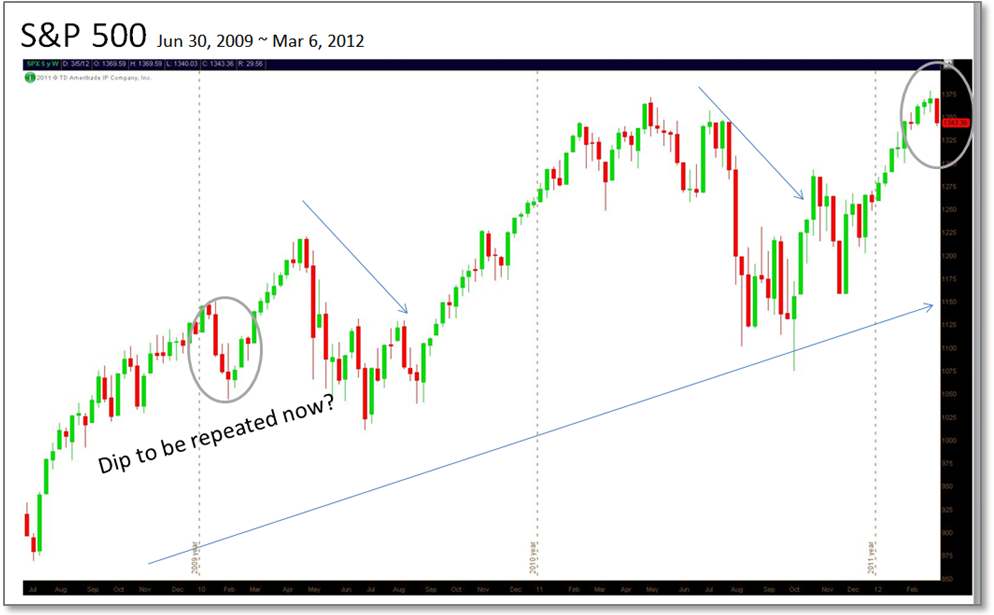 If you look at the chart carefully, you see there are also a few squiggles over that time frame - pullbacks for lack of a better term - that ultimately led to more upside.

This is what pros are referring to when they encourage buying "dips."

I think the odds are good that we're smack in the middle of just such another squiggle and that investors should be buying the dips even if a few days of selling pressure do persist.

Heck, especially if we have more selling - because it suggests we could see another 10-15% on the upside.

Four Reasons to be Long the Stock Market

What if I'm wrong?

That's part of the game. There are no guarantees.

Nobody knows the future, which is why I also encourage the use of trailing stops to help protect capital and capture gains.

Not only do trailing stops remove the emotional turmoil of tough days, but having them in place allows you to concentrate on the upside - even when everyone else is concentrating on the downside.

When it's easier to scare the hell out of people than it is to attract them to the markets, the smart money nearly always goes long.