With few exceptions, most leading financial gurus agree that every portfolio should include some physical gold.

But while the yellow metal itself is great as a long-term hedge against turmoil and inflation, it's a lousy trading vehicle.

For shorter-term trading purposes, most gold investors look first to the futures markets, generally focusing on either the CME Group's full-size COMEX contract, which represents 100 ounces of the metal, currently valued around $165,000, or its little brother, the 50-ounce miNY gold future.

However, that can be a fairly costly proposition, with initial margin requirements on a single 100-ounce contract running in excess of $10,000.

And, as anyone who has held those contracts in recent weeks can attest, it can also be an extremely risky one.

Similarly, last Wednesday's one-day decline of $51.30 an ounce in the price of the full-size April future would have cost traders on the wrong side of the move a whopping $5,130.

Even recent intraday moves have been scary.

On March 9, April gold futures plunged $27.70 an ounce shortly after the open, only to rebound and trade as much as $39.50 an ounce higher later in the day.

So, if those numbers give you pause, but you'd still like to mine for profits in the gold market, what can you do?

How to Trade Gold ETFs

For trading purposes, you can find some pretty good proxies for gold futures that require substantially less cash up front and carry significantly lower risk.

Tops on my list of alternatives to futures are exchange-traded funds (ETFs) linked to gold, and the highly liquid put and call options available on the leading ETFs.

There are now more than two dozen ETFs tied to the gold market in one way or another - either backed by physical gold, portfolios of futures and options positions, or linked to gold and mining stocks.

Some almost precisely mimic the price movements of the metal itself. Others are leveraged to produce price changes two or three times as large as physical gold, and some are structured to move in the opposite direction from the yellow metal (so-called "inverse" funds).

The two largest and most actively traded gold ETFs - and the two that most accurately mirror gold price movements - are:

Shares of both funds trade just like those of any common stock or other ETF, with prices quoted on a per-share basis.

Thus, if you want your gains and losses to roughly mirror those on a single ounce of physical gold, you would buy 10 shares of GLD or 100 shares of IAU.

So that you can see exactly how these ETF shares track actual gold prices, Table 1 compares prices for GLD and IAU with the price of the nearby April COMEX gold futures contract at key points over the past couple of weeks: 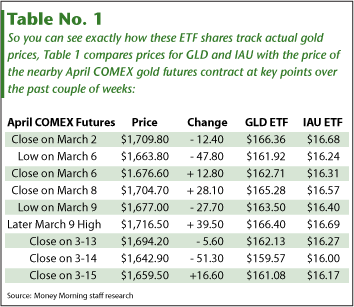 More importantly, with both funds, the losses would be proportionately smaller than the risks on a gold futures trade - a key consideration when the market is highly volatile as it has been recently.

Of course, any gains would also be proportionately smaller, but the percentage returns would be roughly the same - or even larger if trading on margin.

As noted earlier, if you don't want to plop down the cash to purchase 100 shares of GLD, the ETF also has actively traded options over a wide range of strike prices and expiration months.
(Note: Options are also available on IAU, but because of the lower share price only the first couple of months and nearest strike prices are actively traded.)

That means, based on quotes early in Friday's trading session, you could purchase an at-the-money GLD April $161 call option for around $3.30 a share, or $330 for a full 100-share contract.

Similarly, if you've turned bearish on the yellow metal for the short term, but don't want to unload your physical gold, you could buy put options on GLD.

That option would give you the right to sell 100 shares of GLD at $161.00 per share any time between now and June 15, at least partially offsetting the losses on your gold holdings should the price continue to drop over the next three months.

To illustrate how the option premiums track both GLD share prices and the overall price of gold, Table 2 shows the price changes in the April $166 GLD call and put (the at-the-money options on March 2) in response to gold price movements over the past couple of weeks: 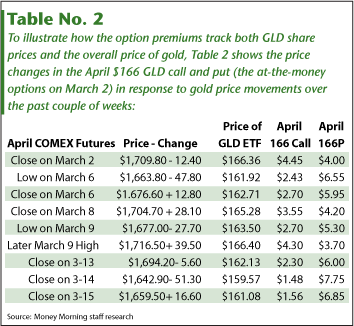 Obviously, both the outright call purchase and the outright put purchase just described would be speculative plays, but that's not the only way you can use them.

The options on gold ETF shares can be used in any of the conservative or hedging strategies detailed in the "Options 101" articles Money Morning has published the past few months, or with any of the techniques discussed in our earlier "Defensive Investing" series.

[Editor's Note: If you want some alternative gold ETFs to GLD and IAU - or would prefer to try the leveraged or inverse funds - you can access lists of each via the related story links below.]

I've truly never implemented this strategy, thank you for discussing it.