The greatest investing mistake you'll ever make is the one you may be about to make.

If you're not gearing up to get fully invested in 2013 and reap what will be generational rewards, you have no one to blame but yourself.

This is what you've been waiting for. This is your time. Here's how to do it and why.

We've probably reached the end of a 30-year bond market bull stampede. I was there at the beginning and fondly remember my trading desk gorging itself on fixed income.

Back then we filled our blotters with Ginny Maes, Treasuries and municipals, anything that had a double- digit yield. And back in 1982 there was plenty of income to be had.

But we weren't buying for yield, we were buying for capital appreciation. As interest rates fell our book of bonds got more and more profitable. I played that hand for 30 years.

But it's over. It's too late to get into bonds now.

Even if you got into bonds in the past couple of years and made some money, which I doubt, it's not worth getting in now with yields at record lows.

And if I'm wrong and there's life left in the bond rally, how much lower could rates go? The risk- reward parameters that govern good investments just aren't there.

What's likely to happen, and may have already started last week, is being called the "Great Rotation." The Great Rotation is an investment shift out of bonds and into equities. 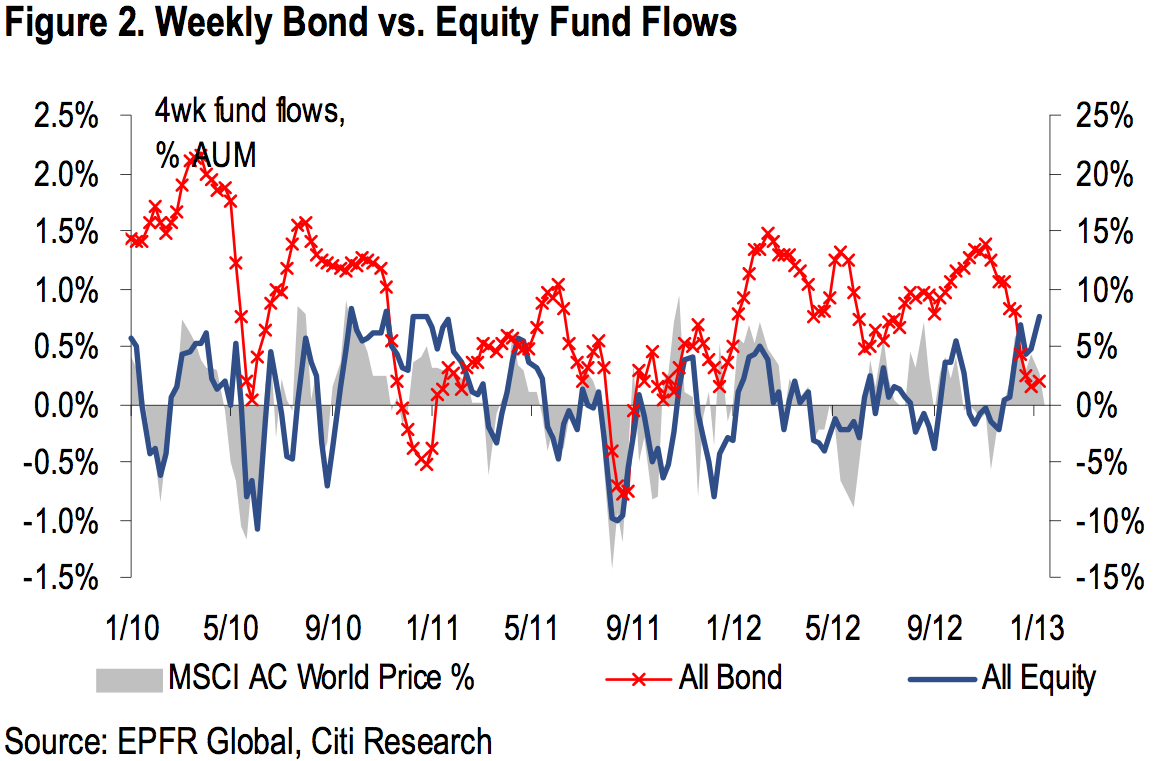 Is the flow of funds depicted in the chart above the opening salvo in the Great Rotation?
I don't know, but I'm not betting it isn't.

The Bullish Case for Equities

Besides, why not stocks and why not now?

There's more yield available in dividends than there is in bonds. And just like when I was investing for yield back in 1982, there's the potential for capital appreciation in stocks that just doesn't exist in bonds any more.

Corporations have never, in my investing and trading life, been in better shape — ever.

Since the Great Recession, they are lean from cutting where they had to. Labor costs are well under control and given what may be a stubborn and structurally high unemployment rate, pressure from labor costs are unlikely.

Another reason unemployment is high and corporations have fewer labor pressures is because of rapid advances in technology. Whether it's software programs or robotics, technology is making labor a continuously smaller piece of input costs.

Low interest rates have not only allowed corporations to retool their balance sheets, they have allowed them to raise huge amounts of capital for expansion, dividends, rainy day funds, or whatever corporate needs arise.

American nonfinancial corporations are said to be sitting on almost $2 trillion of cash and liquid instruments. But not even the Federal Reserve, which collects such data, really knows.

According to the IRS, which tracks worldwide holdings of U.S. corporations, Fed data underestimates the true amount of corporate cash, which the IRS suggests is three times what the Fed reports.

There are plenty of statistics that show that corporations are in great shape. Investing in the stock market is primarily about the health of the companies you're investing in.

Besides, there are so many "alternatives" when it comes to every industry group; weaker links will always give way to better- performing competitors. And if all the competitors in an industry are struggling, well, there are always other industries!

The basic premise for a bull market is that corporations are in good shape to take advantage of demand. The U.S. economy and the global economy may not be creating significant demand, but don't let that stand in the way of analyzing the shape of the suppliers, who are the corporations. They'll be ready when demand picks up.

With the coming Great Rotation flood of money into stocks, and given corporations' strong competitive positions and robust balance sheets, your getting rich is just a matter of having a plan and getting in.

Here's what you should do.

First, the unknowns are known; so instead of being afraid to invest because of them, invest in spite of them and to make money from them.

So, part one of your plan is to not worry about unknowns, but to plan for them.

Second, while it's sexy trying to hit home runs by finding the next Apple at $2.00, big money isn't made swinging for the fences. Getting rich is about getting on base.

These days, getting on base is a lot easier than it ever has been.

It's easy because these days you can invest in broad spectrums of the market, in specific industries, not just specific stocks. You can invest in countries, commodities, gold, currencies, mortgages — you name it and there's an ETF or some other vehicle available to you.

Now, here's where the first part, protect yourself from the unknowns, and the second part, invest in what you know and understand, come together. You can invest in bad things happening, and make money if they happen.

And because you can hedge, or actually bet on the unknowns globally or locally, you shouldn't be afraid of the market. You should embrace it.

Stocks, meaning corporations, are in great shape. So, it's a good time to do a little homework and get into some of the companies and asset classes you like.

You don't have to be a rocket scientist. But you have to be in it to win it.

Stocks, and I'm speaking about stocks across the globe, are probably going to face another quarter, maybe two, of waffling over the U.S. debt ceiling, and China, and Europe, and everything else they've been fretting about. B ut still, they rose last year in the face of the same fears.

It's time to get in, slowly at first and with judicious use of stop-loss orders. But, it's time to get in and build a huge portfolio over the next year, because 2013 is going to be the beginning of a generational opportunity.

Shah Gilani is Chief Financial Strategist for Money Map Press and boasts a financial pedigree unlike any other. He ran his first hedge fund in 1982 from his seat on the floor of the Chicago Board Options Exchange. When options on the Standard & Poor's 100 began trading on March 11, 1983, Shah worked in "the pit" as a market maker. He helped develop what has become known as the Volatility Index (VIX) - to this day one of the most widely used indicators worldwide. After leaving Chicago to run the futures and options division of the British banking giant Lloyd's TSB, Shah moved up to Roosevelt & Cross Inc., an old-line New York boutique firm. There he originated and ran a packaged fixed-income trading desk and established that company's "listed" and OTC trading desks. Shah founded a second hedge fund in 1999, which he ran until 2003. Shah's vast network of contacts includes the biggest players on Wall Street and in international finance. These contacts give him the real story - when others only get what the investment banks want them to see. On top of the free newsletter, as editor of The 10X Trader, Money Map Report and Straight Line Profits, Shah presents his legion of subscribers with the chance to earn ten times their money on trade after trade using a little-known strategy. Shah is a frequent guest on CNBC, Forbes, and MarketWatch, and you can catch him every week on FOX Business' "Varney & Co."

My God. A generational buying opportunity? Now? If I here that expression one more time I'm going to puke. 2009 maybe. But here????

I have only one question to ask. What planet do you live on sir?

Thank you again for your article today! I appreciate your wisdom and insights.

Challenging article, thank you. So good to have a clear opinion to mull over. I hope you are right but there is still a ton of debt out there, much of it glossed over in the 'extend and pretend' game, and that still worries me a lot….Can economies grow when almost all the banks are fundamentally bankrupt??

BEST BET: BUY THE BIG DIPS Once again perennial optimistic investment professionals have taken the good old "buy side" position, with a new twist or two. ( Protect your winnings with stop loss limit orders to manage volatility and the risk of an unexpected tail event now and then). Multiple expansion is the story for stocks in 2013. Each bull market peak has been just a bit higher than its predecesor and each bear market bottom lower than the last ones. So, there is both short and long term volatility to keep a look out for. Given the overall systemic… Read more »

What happened after the LARGEST inflow of $23 billion in late 2007? The stock market fell off a cliff.

What happened after March of 2000? The stock market fell off a cliff.

Great point, mike. Got a response, Shah? Yeah…didn't think so. Anyone buying now is participating in a sucker's rally, i.e. buy now and hope to sell to a sucker later at a higher price. Don't get me wrong, I allocated 100% of my 401k to small caps in November of last year after sitting in 100% cash through the summer and fall. (That was a TOUGH thing to do!) It has worked out great so far. If 1/2 my funds are still in the market at the end of April, I would be shocked. This market is going nowhere for… Read more »

I respect graphs, data, equations, and all that quantitative stuff because they tell me what endless paragraphs can only make a muddle of. But your graph above muddles even more. If you want to be a writer when you grow up, you need to tell your reader: 1) what is AUM and MSCI AC? 2) what data the two vertical axes go with? 3) is the flow into or out of? 4) the "all bond" data is positive while the "all equity" data is about neutral—so what? 5) what does a one year snippet tell me about a "generational" shift—unless… Read more »

If it sounds too good too be true it probably is. The shorts may run the market up but it will not last.

Only big opportunity now is to buy gold stocks as gold will head toward new highs this year. I just moved out of general equities as the % gains appear limited.

"Be fearful when others are greedy". As you say Mike, look what happened later in 2000 and in 2008. I remember 1987 as well, EXACTLY the same thing happened, a flolod of money went in in the early part of the year, only to be wiped out on Black Monday in October!

Can't help but feel the line is being let out right now and the hook is about to be set. Small correction beginning of Feb. for the "Debt Ceiling" with a little run up then and big correction by April/QE2 is my gut feeling.

Dear Author:
You have stated there is a rotation underway from bonds into equities. If this were the case, then bonds would be under pressure. Who is buying these bonds, and why are the yields not going up ????? There is no suggestions how to play the bond market short…. What's up ??