You don't have to be an expert to know that the FDA can literally make or break pharmaceutical stocks.

Depending on how the FDA rules, investors can either make a pile of cash or lose a bundle in a big sell off.

But here's something most investors don't know: There's another federal agency besides the FDA that can rear its ugly head at the worst possible time.

It's the U.S. Drug Enforcement Agency.

It's true. The same agency that chases coke and crack dealers also has the responsibility to regulate prescription drugs to make sure that patients don't abuse them.

That's one of the reasons why shareholders of Arena Pharmaceuticals Inc. (NasdaqGS:ARNA) aren't smiling all the way to the bank — yet.

Thanks to the DEA, sales of Arena's Belviq are still on hold nine months after the FDA approved the release of the first anti-obesity drug for sale in the U.S. in 13 years.

Unfortunately for Arena shareholders, the DEA has really started cracking down on prescription drug abuse. That has created a time delay for new drugs about to hit the market, since the DEA doesn't share the same sense of urgency that shareholders and drug execs do.

As a result Belviq has been in a long holding pattern which must have execs at Arena tied up in knots. How long will this roadblock last? Word around the industry is that the new drug will go on sale "any day now."

But the truth is they've been saying that for several weeks. At this point I actually believe the DEA will wrap this matter up by the end of May.

That's when Arena investors can finally expect sales of Belviq to start to be reflected in the company's bottom line. It's projected that Belviq could add upwards of $1 billion in annual revenue for Arena.

After all, there's no doubt the United States desperately needs this drug.

In fact, according to the American Medical Association, more than one-third of all adults are now obese. We're talking more than 75 million people who weigh at least 20% more than they should.

And let's not forget that millions more could stand to lose a few pounds.

I know from personal experience. I used to be one of them. One night, while channel surfing the TV, I came across a weight-loss infomercial. I jumped up and dialed the 800 number.

The program worked, and to this day, I am still fairly lean, standing 5'11" and weighing in around 180 pounds.

But forget aesthetics — it's the health issues that are the real drain on society. Doctors say weight-related problems contribute to the deaths of more than 110,000 Americans each year.

The big picture is this: Getting Americans to slim down could be worth billions in lower health-care costs.

So, the question for investors is whether or not Arena shares can rally from here.

The short answer is yes, I believe they can. But it won't be without hurdles .

The trouble is, the stock got so high ahead of the approval that many Arena investors are now jaded. As you can see, the stock was on fire last year, rising more than 640% between January and July when Belviq finally received FDA approval. 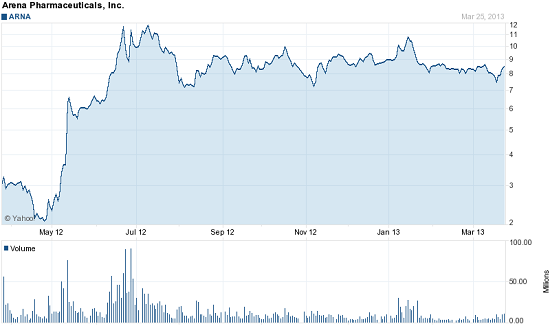 Since those July peak s shares of Arena are down by 36%, falling 20% just in the past three months.

But if Arena passes three key tests, share prices can easily rise from their current price of about $8.60. In fact, I'm calculating up to a 50% gain over the next two years as sales of Belviq ramp up.

But first, Arena has to get its marquee drug to market. That seems certain at this point. The DEA graded Belviq as a Schedule IV drug. As part of the DEA's five-part model, schedule 4 drugs, such as Xanax, Valium and Ambien, have the next-to-lowest potential for abuse.

Second, Arena must convince the Street that it can get the drug on the market fairly quickly and start ringing up sales.

Much of that will fall to its partner in the deal, Eisai Co. Ltd. (OTC:ESLAY). Arena is using Eisai as its primary product distribution partner for Belviq.

There's good news here as well. Eisai has already started to get the drug out to pharmacies so it can hit the ground running once it receives the go ahead from the DEA.

And third, Arena has to prove to the market Belviq is a much bigger winner than Qsymia, a drug made by Vivus Inc. (NasdaqGS: VVUS). In a rare FDA move, Qsymia received approval shortly after Belviq.

This last one may be more difficult for investors to get their minds around. But I believe Belviq will be the clear winner because Qsymia is basically not going to be available to a wide swath of the market — women of child bearing ages.

The FDA approved Qsymia with a warning that it's not to be used by pregnant women. In essence that means, doctors aren't going to prescribe it for women ages 16 to 45 because it isn't healthy for them to get pregnant while on the drug.

So while shares of Arena still face an uphill battle, it's one they easily can win. Once the DEA finally releases Belviq for sale, it's likely headed much higher from here.

Any drug that promises to slim down America is one with a huge potential payout.

Please correct me if I'm wrong, but to the best of my knowledge Vivus' Qsymia got approval before Arena's Belviq – and it was first to market – but in my opinion that's where the story ends. I agree that Belviq will plot a completely different course and will undoubtedly do very well for the company and shareholders.

A very good overview of the ARNA and Belviq drama. Why do you believe that DEA will occur near the end of May ? Jack Lief CEO stated Q1 2013.

Thanks guys for the correction. Funny how time plays tricks with our memories.

hey, Mike….I agree with your points; that's why I think the government needs to look into this matter with the DEA and Hedge funds-big money manipulating this particular stock. Somebody(s) in the DEA is being paid under the table to delay scheduling Belvig…outrageous!!

There is no restriction on women of child bearing age from taking Qsymia. 1000s of women between the ages of 16 to 45 took Qsymia this morning as prescribed. Fact.

It is heavy task for ARENA to bring health benefit with 5% difference in in reduction of body weight in comparison with Placebo. Vivus doubled this with Qsymias performance. Combination of old Q old compound and B might work synergistically.