Despite a pullback in gold prices, hold on to your gold. In fact, look to buy more.

You see, thanks to record highs for the U.S. stock market, a notable shift from defensive assets to "risk-on" trades has occurred.

The yellow metal slumped 1.4% to $1,552.80 Wednesday marking a nine-month low. That's after gold prices slid below $1,600 an ounce in Q1 on hints of a global economic rebound. The slide prompted market participants to shed gold holdings.

It's "certainly understandable" for investors to have sold gold following a 400% appreciation over the last decade and move into stocks, said Malcolm Burne, chairman of the Golden Prospect Precious Metals investment trust.

But, here's why the tide may be about to turn.

If you look at a chart of gold prices over the past 12 years, you'll see we're due for a new breakout. 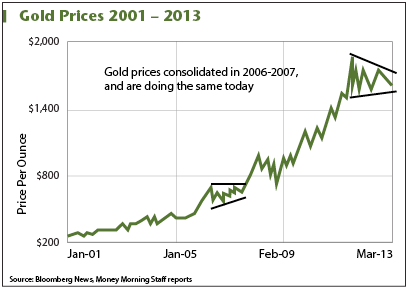 Gold has been going through consolidation pattern since October of last year when it traded around $1,800 an ounce. The phase is similar to the kind of move the metal made in 2006-2007.

The same scenario is emerging.

Another jump like in 2007 would take prices to about $1,970 an ounce in the coming months.

And when the latest round of selling is done, this price climb could start.

"[O]nce the sellers and profit takers have been shaken out fully, the arguments for a new revival upwards are more solidly in place than ever," Golden Prospect's Burne maintained.

The above price chart is just part of the reason the case for investing in gold remains compelling.

"Fundamentally, I think the story for gold is still there," Financial Alliance director Sani Hamid told CNBC in an April 2 interview. "When the world starts to chug up again and the Indian middle class, the Chinese middle class coming up again, that story will come back to the forefront and then I think gold will do well. So I think gold is not a short term story at this particular point, but I think if you have a slightly longer horizon…12, 18, 24 months-I think it will be a good bet."

Nothing draws buyers to gold more than inflation – which the Fed runs the risk of with continued monetary easy – and currency devaluation. The other fundamentals for investing in gold include record-low interest rates and a swollen balance sheet at the U.S. Federal Reserve.

In addition, demand from central banks continues to be strong.

After 20 years on the sell side, central banks became net buyers of the metal in 2011, a trend that has continued in 2013. In the first two months of this year, central banks bought more than 1.9 million ounces, or some $3 billion, of gold.

Finally, the banking crisis in Cyprus overwhelmingly highlights why savers and investors the world over should be bulking gold stores.

In fact, Money Morning Global Resources Specialist Peter Krauth recently outlined how the Cypriot banking crisis is a major reason to be investing in gold. Don't miss his analysis here.

This observation is made in the article: "The phase is similar to the kind of move the metal made in 2006-2007."

Hmmm… Good comment. Made me think. When I look a look a little closer to each of these events. They both start as falling wedges… Then the wedge kinks upward, like a gas funnel from side-on. We may already be in the upward kink this time.

Gold is long overdue for a correction to the manipulation it's seen in the market, but not to the run it's had. For now, Viva Aurum!

I am inclined to disagree. The market for a commodity is a function of its uses. Where is gold used? Primarily in the Jewelry
industry, which at this time is on its face. That is why gold prices have fallen! Until the market for jewelry changes upward, gold will
not rise. It may steady, and go down some more, before it rises once again. I do not see people's disposable income increase in the near future. When this occurs, then Gold will rise, and that is a feature of worldwide economy.

Gold is also used in the dental industry and is used for plating on curcuit boards for pcs, medical equipment and underwater equipment – just to mention a few. :D

The Fed isn't "running the risk of inflation." The Fed is inflating. It's increasing the money supply. That's inflation. Please don't conflate rising prices with inflation. It's a sloppy use of language.

I'm sure what you meant to say is that the Fed runs the risk of seeing prices rise for consumer goods and services. That isn't inflation. That's the RESULT of inflation, but that result doesn't unfold in a linear or highly predictable way.

Inflation is ongoing at the rate of $85 billion a month. How and when and how much that impacts prices is the question.

Right now, the effect of all the new clownbucks being conjured is being seen mostly, but not exclusively, in financial assets. Consumer prices are rising more than the BS CPI numbers claim they are. But who knows when and how violently all that new "money" comes to affect prices of goods and services? It may not cause them to rise all that much as the new funds are mostly being held as reserves at the Fed. They're currently sequestered, if you will. Will that change? You tell me. And if the Fed stops paying interest on those reserves, will they be lent out or just shoved into "dividend paying stocks" or some crazy new derivatives Ponzi scheme?

AND there's one helluva drag coming from the natural forces of bust following the artificially induced boom of the last 30 years. That's dampening the effect inflation naturally has on prices.

Physical gold is a great buy, but not necessarily because "inflation" is coming in spades. It's a great buy because it's real in a world of paper promises that can never be kept, including, but certainly not limited to, the promise that the clownbuck will retain its purchasing power.

There's also that promise that the funds in your bank or brokerage account are really yours, that mortgage debt and even sovereign debt will pay off at face value, that your pension funds and retirement accounts are safe, etc., etc, etc.

Not only gold but all commodities will increase in USD terms as USD is only Printed papers like no time without any collateral .. If gold is only for Jewellry what is 8600 tons held by US Treasury..assume they like jewelry a lot .. then .why all the G-20 countries are also jewelry hoarders ? Gold never mistaken people who trusted its value for 1000 s of years..and humans all believe in golds value.. India, China and half of the worlds population will only invest in a car, house and gold rather than stocks and bonds.. Only Funds do the mistake as they look for short term gains to survive members assoults… Turkey K401 s got permit to place retirement funds in gold just recently … Turkish government silver imports increased %31 last month..they know something we don't know..for us gold is bad investment under the mattress..for governments it is good investment at central bank basements..

A POSSIBLE NEGATIVE INDICATOR: THE DEPARTURE OF BEN BERNANKE

"…and a swollen balance sheet at the U.S. Federal Reserve."

Obviously, the Federal Reserve Bank will not be able to indefinately expand their balance sheet with mortgage-backed securities or Treasury debt (notes). When the buyer of last resort runs out of steam, then those assets it primarily bought should see lower overall demand and therefore, lower prices. Interest rates would then go up and other asset classes (stocks) may go down. It could be a hard landing, but NOBODY really knows that.

So, about all they can do is guess (speculate). Technical traders (chartists) attempt to get a handle on short term trends and then make their bets with slightly better odds. In the end, no matter what your strategy, you must have conviction. It sure is a spectator sport for most readers, especially on web sites like this one.

As far as T-Bonds and Notes, that probably means higher interest rates. There is no "exit" strategy for Ben Bernanke, except one possible indicator pending change: the departure or retirement of current FED chairman, Ben Bernanke. I don't expect him to hang around when the trend (QE's) comes to an end and the FED has to start selling their positions into the market. We won't know exactly when the FED changes its tune, but only what they want us to know. As former congressman Ron Paul often said for 30 years " the FED is not transparent".

I believe gold is more of a long term investment. Of what I could gather from this blog is that the gold prices are on the mark for the next correction, all set and ready to rally!

The Crown Jewels are the most priceless collection in the world , We dont have a dept we have an asset , And most of it is GOLD and that is what an assets is a rare or expensive product , money is a promissory note based on an asset and the best asset in the world is GOLD . We are in the grestest recession the world as ever seen and we are being lead by the nose and told what the Banks and Governments want us to know . Trust in what we know for thousand of years GOLD

The recent gold price stubborn rejection of price appreciation despite many events that would normally push gold higher (US, Europe and Japan money printing on unprecedented scale, EU zone many troubles, Greece bancrupcy on ever nearer horizon, poor economics of the whole EU incl. Portugal, Spain and Italy) is an indication of two scenarios:
1. Carefully designed and executed price manipulation on a tremendous scale by huge funds, including deliberate bearish comments (vide recent G-Sach's warnings about (then) future gold price falls)). So G-S warnings triggered self fulfilling prophecy
2. Investors' shift in risk taking from relative safety of bonds and precious metals to the share market (i.e. to equities).

Which of the above is a leading force of the gold's price decline is hard to say, but i.m.o. No 1 is the primary reason why No 2 became a reality.

As for 'what's next' : there might be some panic selling for few days, then strong move up. As for actual $ values – who knows ? But more important is LONG TERM : I do not see even one reason for gold to keep going down in long term. Inflation will hit (probably not very soon) but it will hit hard many countries. World economy is now as closed a tank as never, and like the hyper inflation in pre WWII Germany was a direct result of printing money, thus printing billions of empty monay every day must trigger high inflation. One does not need rocket science to come up to the conclusion that growing inflation is just around the corner.

And I dare say that high inflation is already in in Australia – look at the prices of the most common products : energy, key food products, building materials, petrol, car registrations, insurance premiums – according to my rough calculations, year 2012 had inflation (in Australia) of approx 8 – 11 % depending on the sample basket contents. Compare that figure to the official CPI of arround 2.4%,

So in short / medium term gold investors may suffer more but in long term they will be winners.