With over 46 million Americans on food stamps, price-conscious shoppers have been flocking to the discount stores.

It's a profitable and steady niche in what has become a "food stamp economy."

It's lead by the big-box discounters such as Wal-Mart (NYSE: WMT) on one end and a trio of high-rising "dollar" stores at the other --Family Dollar Stores (NYSE: FDO), Dollar Tree (NASDAQ: DLTR) and Dollar General (NYSE:DG).

Since the start of the financial crisis, all of these discounters have seen their share prices skyrocket as consumers work overtime to stretch each and every dollar. 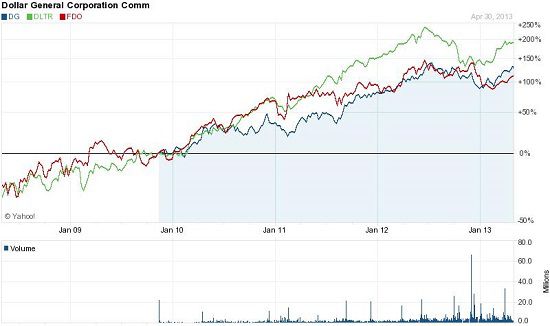 My favorite company in this group is Dollar General Corp., which has seen its share price climb by 129% since its IPO in November 2009.

The question, of course, is whether or not Dollar General still has what it takes to stay in Wall Street's good graces and keep on growing.

Part of that answer depends on what your perception is about the overall state of the U.S. economy. The data is certainly a mixed bag.

But what I can tell you about Dollar General is how it differentiates itself from the competition and how the discounter will be able to hang on to shoppers even when the economy turns.

The Winner in a Fierce Competition

One big reason is its massive expansion.

Dollar General currently has 10,500 stores primarily in lower-income neighborhoods. Last year the company opened 625 new stores and this year will expand even further with another 630 stores.

One state where Dollar General has a very minimal presence, and where it plans to focus a great deal of effort in the months ahead, is California.

Surprisingly, California has a few more loopholes that make it easier to qualify for food stamps. And now an outreach effort to get those who may not know that they are eligible to receive food stamps is starting to make some headway as well. While nearly 3.5 million Californians are eligible for food stamps, only 55% are actually on the program.

The state now estimates that these numbers are bound to increase. For Dollar General this will undoubtedly translate into additional sales as more struggling families find their way into the new stores.

As for the stores already in existence for a year, the future looks bright there as well.

Dollar General has an achievable same-store sales target of between 4% and 6% for 2013, along with a total sales growth estimate of 10% to 12%.

One way that Dollar General sets itself apart from the Wal-Marts and the Targets (NYSE: TGT) of the world is by placing a number of its stores in rural and suburban areas where the nearest Wal-Mart is quite literally a gas-burning drive away.

Customers are Marching into Dollar General

As with all dollar stores, Dollar General has the stigma that most of the products it sells are inferior. Dollar General, as the name implies, does have a slew of items that are priced at one dollar or lower.

However, that accounts for only 25% of its inventory.

Dollar General stands apart from some of its rivals in the dollar category by offering deeply discounted prices on name brands such as Coca-Cola, Kellogg's, Procter & Gamble, Kimberly Clark, Unilever, General Mills, Nabisco and PepsiCo.

These prestigious name brands, with the abundant advertising behind them, breed brand loyalty and are a big plus for Dollar General.

So even if the economy were to take a miraculous turn for the better, Dollar General will still be able to benefit from this customer loyalty and not have to worry as much about its customers being turned off by the "dollar" stigma.

Dollar General also expanded its private label products, which obviously have far better profit margins. The company is adding more coolers and freezers to accommodate for the increased product line as well as the increased consumer demand. It has also remodeled or relocated hundreds of stores to accommodate these changes.

Another factor driving more traffic (unfortunate or otherwise) into these stores is the introduction of cigarette sales. These sales have the effect of bringing customers into the stores more frequently, and by doing so they are more likely to buy a few extra items.

Tallying it Up at the Register

I could break down the financials and the charts of this stock for you, but the fact is Dollar General is uniquely placed amongst its rivals, and has shown great strides in improving both its top and bottom line.

That's why its share price is up so big over the last four years. It's a fundamental growth story.

As Dollar General's CEO stated in the most recent conference call, "When times get tough is when the customer needs us even more. I think part of the reason I'm so bullish on '13, it's very probable things are going to be a little harder out there."

And even if the economy were to turn for the better, I believe that there won't be an all-out exodus from Dollar General's stock.

In a hard economy, it simply pays to be a BUYER of Dollar General.

I wouldwould like you to do a research on galena bio tech (gale).. this stock seems to be interesting.
Thanks
J.

astx what is its short term future?

I bought CDE, recommended by a friend, years ago, before the reverse split. Needless to say, the stock has not performed to my expectation. There were some good sell opportunities, but I missed them. Right now, I feel that I cannot sell. Their last earnings report, I thought, was very good, but the Market has not responded. Is it a cyclical stock, and is there hope for CDE?