If you like bull markets, you better hope Janet Yellen is one of the most talkative Fed Chairs in history.

It's not that she's going to say anything brilliant or insightful, just that she says something -  anything - on a regular basis.

You see, there's a direct relationship between how much she says and what's happening in the markets. What she says is almost completely irrelevant.

I know people spend hours agonizing over the slightest nuances in each statement, but really none of those things matters.

Unless you are a policy wonk, Fed statements are pretty consistently useless pontifications made every 6 to 8 weeks by the head of a supposedly independent financial body that is, in fact, a highly politicized entity.

The Fed exercises little if any control over variables and targets that it changes at will and deems relevant at its sole discretion.

Harsh? You bet. But not without merit... 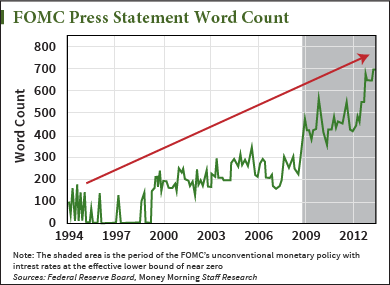 The first Federal Open Market Committee (FOMC) press statement was released on Feb. 4, 1994, and it was all of a whopping 99 words: short, succinct, and to the point.

You can chalk this up to a more communicative Fed or the proliferation of media in the Internet Age if you want. It's not a stretch of the imagination with all the technology that we have at our disposal.

I think that'd be a big mistake.

I think the Fed is saying more in a deliberate attempt to explain its actions the way a child tries to justify getting his hand caught in the cookie jar. The goal is to bamboozle the American public into believing that expanding the Fed balance sheet by more than 450% in excess of $4 trillion is justifiable, responsible, and prudent.

I believe the fact that they are communicating more and saying less is very deliberate. Reality no longer fits their data, so Yellen is changing the data. She even blamed the weather, which is not too far from the "dog ate my homework."

As the Words Pile Up, So Do Fed Assets 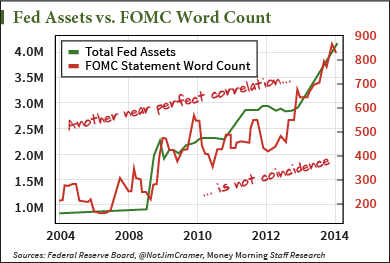 The Fed missed the financial crisis in formation and has been wrong about critical inflation and jobs data for several years in a row now, which means that it's got to "explain" itself in other ways.

Coincidence? I think not... there is a direct correlation between the rising FOMC word count and Fed assets.

To be fair, statistically speaking, correlation is not causation. If you remember your high school statistics classes, the fact that one data set is highly correlated to another does not mean that one caused the other.

But when you tie a third data set in, and a fourth and a fifth... coincidence goes right out the window. 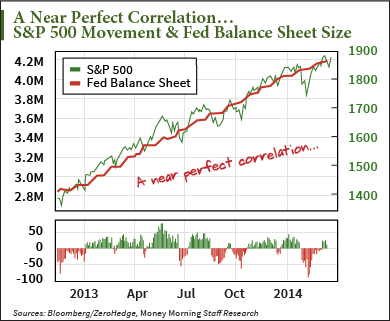 It's one thing to say that the Fed is simply doing a better job of communicating. And entirely another when you realize why...

MOTIVATIONS AND INTENT of CENTRAL BANKERS

I would suggest that from its inception in 1913 that the FED and its founders, as well as current member U.S. BANKERS are anything except " well intentioned". Establishing another Central Bank in 1913 by an Act of Congress (stupid) shows how determined the old European Banking Families are in their insatiable appetite to dominate the world of finance.

They and their global counterparts are extremely dangerous to your freedom and finances and have become a power unto themselves. They are positioned above all sovereign governments and overrule elected politicians at all levels, including the President, Congress, and Senate. To them, politics is nothing but claptrap for the ignorant masses ( shepple) Moreover, they are unaccountable to voters, as well.

Precious metals don't seem to be very precious. I put a lot of money in silver and gold, and its dropping worse than any t investment I have.

I believe it is due to all purposeful manipulation and when you finally concede and sell watch them skyrocket.

Oh, I wouldn't put much stock in that. Janet is a woman. Women like to talk.

Hey, Fitz, a word to the wise, cover your assets. When the Global Economic Reset hits, all bets are off ! ! !

the best understanding of THE FED came to me by watching the free documentary – "The Money Masters" It explains How International Bankers Control America. At 3 1/2 hours long you will understand more about central banking than 99.99% of the public. Best education on this subject ever.

Simply search "The Money Masters" on youtube and get educated