Every once in a while I like to circle back to some of the great questions I get from you.

Today, I want to dive into one from Suzanne P., who wants to know if "Fibos" can help her make money in the markets.

In a word, yes. But, you've got to understand what "Fibo" analysis is and how it works to make it profitable....

The Mathematical Sequence That Shows Up Everywhere

"Fibo" is short for Fibonacci - as in, Leonardo Fibonacci. Born in Pisa, Italy, around 1170, he's considered by many to be the single most influential western mathematician of the Middle Ages. His 1202 book, Liber Abaci ("Book of Calculation"), remains instrumental to our understanding of mathematics to this day and is filled with examples that applied to money-changing, interest calculation, and commercial bookkeeping, for example.

Today we know Leonardo simply as "Fibonacci," which is same name given to a numerical series in his book that he did not discover but that he used as an example. Despite their reputation as being difficult or complex, in reality, Fibonacci numbers are easy to learn and easy to understand.

Right away you can see a pattern. One plus one equals two. One plus two equals three. Two plus three equals five. And so on.

But if you look closer, something else emerges. Every number in the series is approximately 0.618-to-1 in terms of its relationship to the number after it. This ratio never changes because the proportion remains the same.

This is important so don't lose that thought; we're going to come back to it in a minute.

What's simply amazing to me is that Fibonacci (and lots of scientists after him) have found Fibonacci numbers in nature. For example, the number of petals on flowers is often a Fibonacci number, as are the number of "cells" in a pineapple's skin. Pinecones, sunflowers, beehives... they all display Fibonacci's numbers or sequence in some way.

More amazingly, plant leaves are often arranged in spirals or shapes that, when counted, are found to be adjacent Fibonacci numbers. In fact, if you divide the arc they form along a vine, for example, the arc length angle ratio is equal to 137.5 degrees. The numbers are so consistent that the relationship is actually called the "Golden Ratio" or the "Golden Mean."

Mathematically, it looks like this, where the Greek letter phi represents the golden ratio:

Geometrically, if you draw it out, the Fibonacci ratio or "Golden Mean," if you prefer, looks like this... 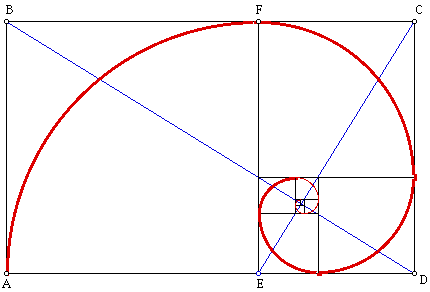 These relationships can be found all over the place in the natural world in everything from dolphins' fin sections to the ratio between human forearms and hands. Even the cochlea in our inner ear is a "golden" spiral adhering to this set of proportions.

Fibonacci numbers and ratios can also be found - you guessed it - in the stock market.

Interesting. I agree especialy with the statement about the stock market being the collective result of the psychological decisions of millions of traders. I think sometimes that very fact is often forgotten, and history shows just how much and how quickly enthusiasm or fear can drive given stocks far above or below their true intrinsic value. The Fibo system could work in trading, given some nice software and research time.

Thanks for your note Brad.

I've found Fibonacci numbers and sequences to be an immensely rewarding puzzle over the years, especially when I am trying to get a gauge on key support and resistance levels in advance. In contrast to when I started and the only tools were very expensive custom made stuff, there's a lot available for free now in the various online packages. This puts Fibonacci analysis within reach for just about everybody.

Best regards and thanks for being part of the Money Morning Family.

Interesting article. Well explained and written. But you neglected to include the most important piece of information. According to this same Fibo analysis, where is the market headed now? Regards.

Haha, yes indeed 'aprov'… that part I must have missed ;)

The simple fact of all this esoteric stuff is this; You can apply lines/levels/arcs/fans etc to literally ANY part of the chart, and you'll ALWAYS come up with perfect reactions and contact points… does it mean that it's those tools that are 'creating' or 'causing' the reactions – of course not!

To prove this point, try this:

Open up a chart of ANY symbol, on ANY timeframe, from ANY time. Take out your fib retracement tool, or fib arc, or fib fan, or whatever, then CLOSE YOUR EYES and start applying the tool randomly… literally just click at random anywhere. Then do the same with your line tool, and any other type of drawing tool as well.

Now inspect your work of art… MIRACULOUS huh! Look how many times the market bounced away from the various things you just applied, often perfectly to the very tick!

But does it mean these tools caused the reactions – of course it doesn't! Because literally ANY line, or ANY fan/arc etc, placed in ANY location on ANY chart, will give the impression of at least some contact points and reactions.

Try it and see, then decide if you still believe in all this stuff ;)

Very interesting article and I didn't understand any of it ! But it was fun to read. However, other than the history involved for me it was a blank page. Keep on keeping on.