And these deals are great news for the investors holding these hot stocks.

Here's a roundup of Monday's deals, and what they mean for the buyers and their respective industries. 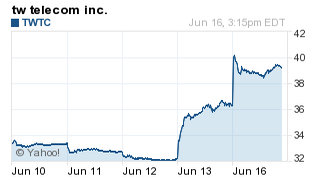 In acquiring TWTC, Level 3 gets a prominent player in network services, particularly Internet access and online-based voice calling to businesses. Indeed, TWTC posted $36.5 million in profit in 2013 on revenue of $1.6 billion. The buy also makes LVLT a stronger rival to AT&T Inc. (NYSE: T) and Verizon Communications Inc. (NYSE: VZ) in business and Internet services. LVLT expects the deal to generate about $240 million in cost savings.

M&A activity in the telecom industry has caused some of the biggest deals of 2014, as companies vie for a bigger scale. Comcast Corp. (NYSE: CMCSA) has agreed to buy Time Warner Cable Inc. (NYSE: TWC) for $45.2 billion. AT&T Inc. (NYSE: T) is looking to take over DirecTV (Nasdaq: DTV) in a deal worth $67.1 billion. And, Sprint Corp. (NYSE: S) and T-Mobile USA (NYSE: TMUS) are mulling a merger.

The Wall Street Journal says more deals are likely as small TV channels are gobbled up. Yet, the most logical deal in the sector might be for CBS Corp. (NYSE: CBS) to merge with its former sister company Viacom Inc. (Nasdaq: VIA), according to The Journal.