While products like the iPhone 6 and iWatch will make a big splash in the fall when Apple Inc. (Nasdaq: AAPL) unveils them to the world, they're not the only reasons to think about buying Apple stock right now.

One major initiative in particular could have a huge long-term impact on AAPL stock, but the media have largely ignored it because it's not particularly sexy.

Ever heard of iBeacon?

If you haven't, it's time you learned about this game-changing technology that will transform not just how people shop but how they interact with all sorts of businesses. 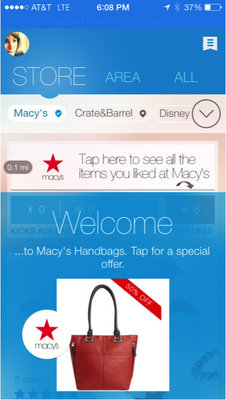 Before we get to how this could make Apple money and affect Apple stock, a brief explanation of this technology is in order.

The actual beacons are small Bluetooth Low Energy (BLE) transmitters mounted throughout a given location, such as a retail store or a stadium, creating a "zone" in which a person's precise location can be tracked via any mobile device equipped with BLE.

That sounds mildly creepy, but iBeacon does not draw any personal information from the mobile device. And there are lots of benefits, both for the customer and the business.

Let's assume we're talking about a large retailer with a lot of different products.

As a customer approaches the store and comes into range, an iBeacon-enabled app can deliver a greeting and any assortment of offers and recommendations.

If the customer is looking for a specific item, iBeacon can guide the customer not just to the right aisle, but to the exact spot where the product is located.

"We can find out where you are standing and how long you've been standing in front of the Michael Kors handbag and if you haven't purchased. And if you haven't, I'll send you a little note to give you encouragement to do so," Macy's Inc. (NYSE: M) Chief Executive Officer Terry Lundgren told Bidness Etc.

Macy's is just one of the big-name partners working with a startup called Shopkick that has created an app for retailers to leverage the iBeacon technology. Others include American Eagle Outfitters (NYSE: AEO), Safeway Inc. (NYSE: SWY), and Target Corp. (NYSE: TGT). So far the app has been downloaded 6 million times.

Of course, Apple also uses iBeacon in its own retail stores.

But iBeacon has uses beyond retail…

The iBeacon Opportunity for Apple Stock Is Huge