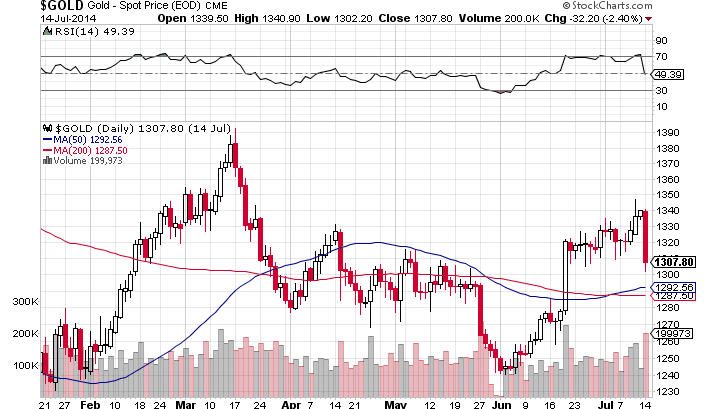 Here's why gold prices went for a roller-coaster ride today…

The day started out promising for the yellow metal as it took up its familiar stance as a hedge against financial and geopolitical uncertainty and investors flocked to the safe-haven alternative asset.

Goosing gold early Tuesday were worries that a unit of Espirito Santo International might not be able to pay back a loan to Portugal Telecom (NYSE ADR: PT). That ignited new fears about Europe's anemic financial system.

Last week, the Portuguese bank missed repayments on some short-term debt securities. That sparked concerns that the Portugal Telecom loan repayment would also be delayed or missed.

And, the country's government refuses to step in.

Over the weekend, Portugal's Prime Minister Pedro Passos Coelho ruled out any state support for the ailing lender. "Increasingly, banks look at the merits of projects, and those that don't pay the price. Companies that look more to friends than competence pay the price, but that price shouldn't be paid by society as a whole, and much less by taxpayers," Passos Coelho said.

Also stoking gold Tuesday morning were renewed anxieties over the grave situation in the Middle East, as well as ongoing tensions between Ukraine and Russia.

A Russian military transport plane was shot down over eastern Ukraine on Monday. Additionally, new reports surfaced that Russia is building up forces along its border with Ukraine.