The U.S. housing market is in trouble… again.

That will be good news for the shorts, but bad news for housing.

Why are there still dark clouds over our supposed economic recovery? We're five years on from the mortgage meltdown, after all, and housing prices have bounced back dramatically and interest rates are at near-record lows.

I've been saying it all along. The housing rally is fabricated. It is, as Pete Townshend sang in The Who's last great single, an "Eminence Front"… 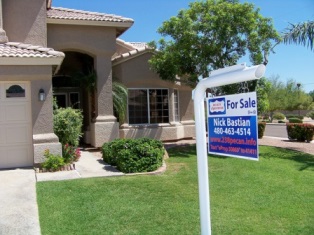 The so-called resurgence of the U.S. housing market is not about individuals and families buying back into the market, though of course some have. Home prices have bounced back because of institutional buyers paying cash for "affordable" housing.

I'm talking about the homes that were bid up when banks were giving mortgages away. These are houses in the $200,000 to $450,000 range… you know, the ones that banks foreclosed on in the tens of millions.

Institutions with cheap borrowing capabilities have been buying, with cash, foreclosed homes hand over fist in order to rent them out. And now they're securitizing packages of those homes and selling interests in pools of them to other institutional buyers looking for decent-yielding investments.

Traders bid up those homes. It's not about a real recovery in housing.

As far as more expensive homes go, the buyers there are mostly foreigners taking money out of their respective countries – China, Russia, Ukraine, Latin America, Europe, South Africa, South Korea. These are people with money who want to park it here in real estate.

After all, there's more to gain from homeownership than 2.5%-yielding 10-year U.S. Treasury securities.

UP IN THE AIR

There is a lot of services tied to the residential market, not to mention home improvement retailers like Loews and Home Depot ( who sell mainly to contractors). Construction and remodeling are going strong in Calif. as is remodeling. I noticed the tempo pickup in the past two years as home valuations rebounded to previous levels of the last cyclical peak in Sept. 2006.

Around here, they are not rentals, but there are some foreign buyers or cash buyers. Banks are not making very many home loans even at historically low interest rates. Right now, the U.S.A. is the place to be. What might happen to affect capital flows and cause the (foreign) demand to dry-up? Obviously, higher interest rates are a joker in the deck, as are currency rates. Seems up in the air.