Though it has only very briefly brushed against the $21-an-ounce mark, the silver price today reversed course from last week when the white metal was down for the first time in six weeks.

Silver was trading at $20.93 an ounce by the time markets opened yesterday (Monday) and has been trending upward, albeit very slightly, to $20.97 an ounce at 2 p.m. EDT today (Tuesday).

Prices saw their biggest jump at around 8:30 a.m., after the U.S. Labor Department released data that indicated inflation rose 0.3% on higher gas prices, which rose 3.3% in May, accounting for two-thirds of the spike in prices. Silver was trading up 1.1% to $21.02 minutes after the release.

The three major indexes all dropped yesterday as tensions heightened in the Gaza Strip and Ukraine, the Dow Jones Industrial Average dropped 0.28%, the Nasdaq dropped 0.17%, and the S&P 500 dropped 0.23%. Silver rose $0.03 an ounce and hit intraday highs of $21.16.

Precious metal investments will generally get a boost from bad news in the stock market and from any indication that inflation is expected to accelerate. This is because it is a hedge investment that investors will flock to as a store of value when equities aren't performing well or the dollar is weakening in the face of rising prices. Both were catalysts in silver's slight gains over the last two days.

What Was Driving Silver's Summer Rally? 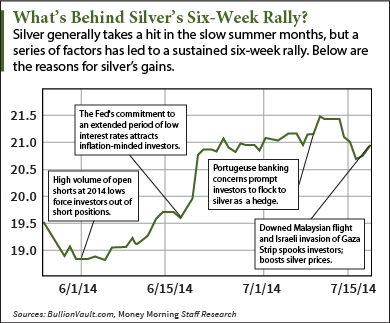 This week silver is coming off its first week of trading down in over a month. Prices rallied as much as 14.5% from lows in June as inflation-minded investors, fearful of the U.S. Federal Reserve's policy of low interest rates that was reaffirmed in a June Federal Open Market Committee meeting, poured into silver. Additionally, a large volume of short covering, fresh long positions, and a Portuguese banking crisis kept silver prices up.

They began to slump last week, as traders began to take profits on the new highs, and investors began to back away from fears that the trouble of one Portuguese bank was going to threaten a larger part of the European financial sector, dropping prices 3.5%.

"I have to say that I do think this is simply the market's healthy process of profit taking," said Money Morning Resource Specialist Peter Krauth.

Silver did recover slightly on Israel's invasion of the Gaza Strip and the downing of a Malaysian passenger plane carrying 298 people, but not enough to erase its earlier losses.

Weekly data from the U.S. Commodities Future and Trade Commission also show that over the last two weeks investors are building up more long positions and liquidating more short positions. From July 8 to July 15, short positions on silver have dropped 0.2%, while long buying is up 0.3%.

Gold is trading down today (Tuesday), click here to see what's driving prices down and what's next for the yellow metal…