You see, over a two-month period beginning in April, the Indian general election of 2014 – the largest-ever election in the world in terms of voter headcount – saw the seating of a new government in India.

With that, we expected to see the country's gold demand shoot up almost immediately. That's because the new government had campaigned on a political platform that called for the loosening of the country's heavy gold import duties. These duties have been stifling Indian gold demand since they were imposed in 2013.

But now it's five months past the election, and still, the stringent gold import duties have not been loosened whatsoever. The result: stifled gold demand.

That's why data released by the World Gold Council (WGC) in August showed that Indian gold demand fell 39% to 204.1 tons in the second quarter. The WGC's report also showed that gold jewelry demand in the country was down 18% at 154.5 tons.

Indians were buying so much gold that it exacerbated the nation's current-account deficit, putting it at a record 4.8% for 2012. Short of banning the sale of gold outright, the Indian government tried nearly everything to slow gold purchases.

First, it imposed import duties on gold. Then it hiked those duties three more times – all the way to 10% in 2013 alone. Still not enough, on Sept. 17, the Indian Ministry of Finance raised gold jewelry import duties from 10% to 15%. It imposed an 80-20 rule, by which a minimum of 20% of all gold imported had to be exported before further imports could be made. 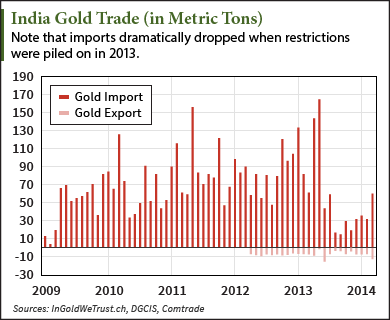 As a result of the government's action, higher rupee gold prices and ever-increasing gold taxes weighed on demand. Indian gold imports fell considerably in the latter half of 2013, dropping to 30% of former levels. The effect has continued in the first half of 2014.

But the elected officials who promised to loosen the import duties have not followed through because of uncertainties over oil prices and U.S. monetary policy.

"What's the point in relaxing everything and being faced with a higher interest rate scenario and higher oil prices," Somasundaram PR, head of WGC operations in India, said to Reuters last week. "Given all that I think (the rules) might extend into the first quarter of next year."

On the new government's first budget in July, the gold import policy was unchanged. Now India isn't expecting to see a duty reduction until 2015.

Still, gold bugs can expect Indian gold demand to rise considerably in the third quarter – in fact, it's already happening…