Why oil is down today: Crude oil prices continue to plummet today (Wednesday) as West Texas Intermediate dropped to $86.83 per barrel for November delivery on the New York Mercantile Exchange. That's WTI's lowest price since April 17, 2013.

At today's low, the price of oil has decreased nearly 17% since reaching a three-year high in June, as increased global supply exceeds demand. 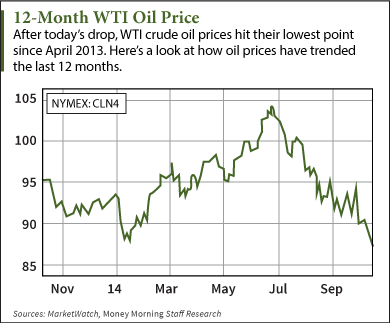 The supply glut is attributed to a recovery in Libya, as well as increased output in Saudi Arabia, Iraq, Nigeria, and Angola. Booming production in the United States has had a major impact on oil prices as well.

According to the U.S. Energy Information Administration (EIA), U.S. oil production reached 8.7 million barrels per day (bpd) in September, which was its highest total since 1986. That's expected to grow by another 963,000 bpd in 2015.

"If prices go to $80 or lower, which I think is possible, then we are going to see a reduction in drilling activity," Jeffries LLC's Vice Chairman and Global Head on Energy Investment Banking Ralph Eads told Bloomberg. "It will be uncharted territory."

The falling price of oil has put pressure on some OPEC nations, who have called for decreased production. In September, output from OPEC nations reached a yearly high of 30.935 million bpd.

On Oct. 1, Saudi Arabia lowered its official selling price, a sign the world's largest oil exporter expects prices to remain low. Saudi oil accounts for roughly 42% of the world's supply, and the price cut indicates the country is dedicated to maintaining its market share.

OPEC will be meeting on Nov. 27 in Vienna, and a debate regarding output is almost guaranteed.

Of course the price of oil will go up sharply right after the elections!!!