Investors interested in the high-profile Box IPO will now have to wait until 2015. The company announced Oct. 2 it will once again delay its initial public offering due to market volatility. 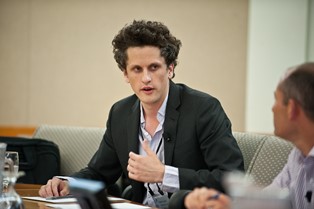 Box is one of the hottest tech companies in Silicon Valley. It's a rising star in the cloud computing industry – a field that Forrester Researchsays will grow to $241 billion by 2020. The IPO is expected to raise roughly $250 million.

But the company and Chief Executive Officer Aaron Levie want to wait until the market steadies itself before going public. All three major indexes fell in the two weeks before the delay. The Nasdaq Composite dropped 3.4%, the Dow Jones Industrial Average 2.8%, and the S&P 500 3.2%.

"Our plan continues to be to go public when it makes the most sense for Box and the market," Box spokeswoman Ashley Mayer told Bloomberg. "As always, investing in our customers, technology, and future growth remains our top priority."

This isn't the first time Box has delayed its IPO. In May, Levie decided to shelve the deal as the technology sector slumped. The Nasdaq fell nearly 6% from March through mid-May.

Markets have become even more volatile this week. The DJIA dropped 272 points on Tuesday, followed with the year's biggest daily gain on Wednesday. Thursday saw another 333-point drop.

This means Box won't be the only company backing out of a debut – which will bring a lackluster end to a blockbuster year. This has been the busiest year for IPOs since the dot-com era of 1999 through 2001, with 220 companies going public.

The deal raised $25 billion on Sept. 18 to rank as the largest initial public offering in history.