The Dow is down 3.9% in October, but gold prices have climbed 1.7%. That's because despite what the mainstream media says, gold is the best of all safe haven investments to own.

No asset has had as much history of purchasing power as gold. Fiat currencies are unreliable - they aren't tied to any asset of value. Their worth comes from government regulations and laws, which are subject to crumble over time.

"Gold was used as currency for centuries. In fact, it's still being used for transactions in places such as China, India, and much of the Middle East - regions that are eager to diversify away from the beleaguered U.S. dollar," Money Morning Chief Investment Strategist Keith Fitz-Gerald said. "As we face war, terrorism, and other ugliness, the need to hedge value is beginning to supersede the need to hedge price. Gold is one of the few assets with that capability."

Gold's status as the best store of value can be seen when gold prices spike during times of great geopolitical conflict. This year's conflicts in the Middle East and between Ukraine and Russia show how the two trends move in tandem: 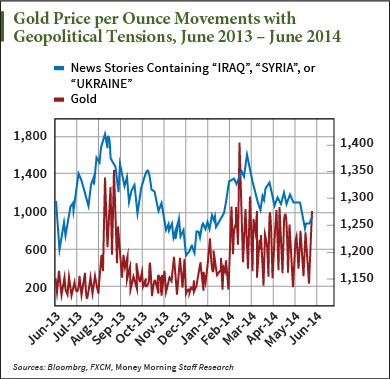 The movement suggests people trust in the enduring value of the yellow metal more than governments and paper money, which are both prone to collapse. A similar effect can be seen when the U.S. stock market plummeted in 2008-2009 - gold soared: 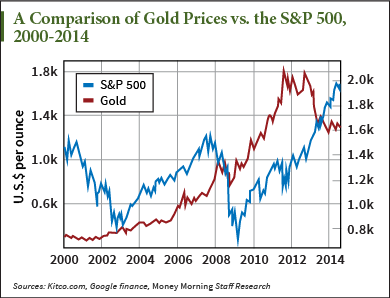 Yet another example of this idea is the bank of Cyprus' failure in 2013. Last March, the country announced it would confiscate up to 10% of bank deposits. The news pushed gold up $24 an ounce on safe haven demand.

"Physical gold coins or bars are an unequalled safe haven, due to their liquidity and lack of counterparty risk," Money Morning Resource Specialist Peter Krauth said at the time. "It is the only liquid, universally recognized form of transportable wealth that is not simultaneously someone else's liability. That's what makes gold so desirable."

The yellow metal doesn't just protect investors because they can hold it outside of governments and banks. It's is also a valuable hedge because financial institutions themselves use it to buy on margin - when they go into debt, they use gold as collateral for the funds being borrowed. And they're buying on margin at an ever-increasing rate...