While wandering the halls of the Consumer Electronics Show (CES) in Las Vegas, what gets us the most juiced is finding the odd and unexpected - but also potentially hugely profitable. 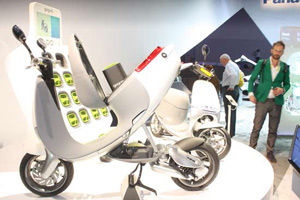 The Gogoro Smartscooter is not only the coolest electric scooter I've ever seen - it will also introduce what I believe will become the world's de facto battery-sharing ecosystem.
We certainly didn't foresee Gogoro Inc.'s electric scooter powered by "swappable" batteries instead of charging stations. These swappable batteries have NFC authentication, 256-bit encryption (to deter theft and fraud), and smart circuitry.

These Smartscooters are going to be enormous in the developing world's "megacities," where most folks get around on two wheels instead of four. And I wouldn't be surprised to see techies tooling around on them in San Francisco, Silicon Valley, and beyond in the coming years - they look smart, and the company's founders promise they'll be affordable.

Gogoro is a Taiwan-based startup led by Chief Executive Officer Horace Luke - a guy who's enthusiasm and smarts are amazing. Luke and his Chief Technology Officer, Matt Taylor, have raised just $150 million in venture capital so far. I expect that VC figure to soar once everybody sees these guys in action at CES.

To follow all of Michael's highly profitable tech investment opportunities, join him at Strategic Tech Investor by clicking here. He'll send you new recommendations every week. ­