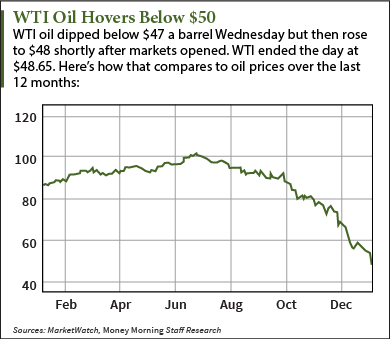 Current crude oil prices in the United States were on pace for a two-day winning streak Thursday amid modest gains.

Brent crude oil prices today flirted with $51 a barrel early in trading. They dropped as low as $49.66 Wednesday, the lowest level since April 29, 2009.

"We believe that the market is testing the water to find where the bottom of crude oil is and it seems, for now, $50 is the limit for Brent," Phillips Futures analyst Daniel Ang wrote in a daily note Thursday.

U.S. crude oil prices ended a four-day slide Wednesday when they gained 1.5% to $48.65. This bump came after data from the Energy Information Administration (EIA) showed U.S. oil inventories last week fell 3.1 million barrels. Expectations were for an increase of 880,000 barrels.

But the current crude oil price story is still ugly.

Both Brent and WTI have seen their prices halved since June highs. One of the biggest factors has been the Organization for Petroleum Exporting Countries' (OPEC) refusal to cut output.

OPEC has forecast an increasing oil surplus in 2015. It cites mounting stockpiles outside its 12-member countries and tepid global demand growth. But it still has no plans to slash output.