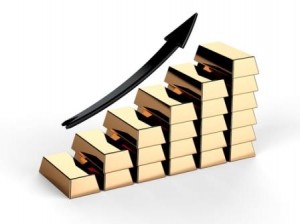 A shocking move Thursday from the Swiss National Bank sent the gold price today soaring to $1,264.80 – a four-month high.

Switzerland's central bank surprised gold markets when it scrapped a three-year-old cap on the franc. The safe haven currency, along with safe haven gold, surged on the news.

The franc climbed 14% against both the euro and the dollar in early trading Thursday. In frenzied, early overseas trading, the franc surged some 30% higher against the euro.

Swiss stocks, however, took a shellacking. Swiss investors bailed on markets, fearing that a strong franc would hurt company profits. The SMI, the Swiss Exchange's main index, fell more than 10% and wiped roughly 100 billion Swiss francs off the blue-chip benchmark. Swiss stocks were on track Thursday for their biggest one-day fall in at least 25 years.

Are you confident your gold is the real deal? Scammers have been tricking investors with fake versions of the yellow metal. Keep yourself protected with these seven ways to tell if your gold is legit…

The SNB's abrupt move was unexpected. Just days ago, SNB officials said the 1.20 francs per euro cap remains the foundation of the bank's monetary policy. The cap was introduced in 2011, at the depths of Eurozone crisis, to prevent deflation and a recession.

The move comes a week before the European Central Bank is widely expected to launch a sizable stimulus program. That means the SNB would have to saddle its balance sheet with even more devalued Eurozone assets – which would pressure the franc versus the euro.

The SNB justified Thursday's move by saying the Swiss franc was no longer as dramatically overvalued as it had been when the policy was first implemented. The dollar's sharp appreciation over the last six months has seen to that, the SNB said.

Trading was volatile across the globe as the Swiss franc is the sixth most-traded currency in the global foreign exchange market, according to the Bank for International Settlements.

"Nobody really suspected this move so people are looking for safe haven investments," Julian Jessop, head of commodity strategy at Capital Economics, told Kitco. "It just proves what we have been saying that gold is low enough to be an attractive investment for investors looking for some security." Gold is well off its all-time high of $1,917.90 an ounce.

Bargain-priced gold looks particularly attractive to investors concerned about the state of the global economy.

So far this year, the Dow Jones Industrial Average has averaged swings of 294-points each day, according to the Wall Street Journal. Keeping markets on edge are plunging oil prices, geopolitical threats, and diverging central.

Late Tuesday, the World Bank trimmed its outlook for global growth. It expects the global economy to expand 3% this year, up from 2.6% in 2014, but slower than its earlier 2015 forecast of 3.4%. A strengthening U.S. economy and plummeting oil prices won't be enough to offset trouble in the Eurozone.

The updated outlook sent the Dow down 1.1% Wednesday.

Any kind of slowdown could prompt the U.S. Federal Reserve to hold off hiking interest rates this year. That would be good for the price of gold.

These three stocks just got a major "Buy" signal… A new tech trend surfaced the other night at the Golden Globes. Billions of dollars are getting sucked out of one industry and into this brand new one – and we know how to play it…