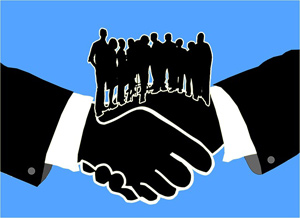 2015 Mergers and Acquisitions: M&A activity, if executed properly, can result in industry dominance and shareholder wealth.

So what does 2015 have in store as far as mergers and acquisitions? Here are the most anticipated and industry-changing deals ahead…

Five of the Most Anticipated 2015 Mergers and Acquisitions

Shareholders of both Zillow Inc. (Nasdaq: Z), an online real estate database, and Trulia Inc. (NYSE: TRLA), an online residential real estate database, voted in December to approve a deal that would merge the two companies. If the $35 billion deal is sealed, the anticipated merger is expected to close some time in the first half of 2015. The companies have stated they plan to maintain their own brands and continue to keep prices competitive on advertising rates. Zillow is particularly encouraged to merge because News Corp. (Nasdaq: NWS) will acquire rival Move Inc. (Nasdaq: MOVE), operator of Realtor.com.

Money Morning readers, read on to learn about a merger so controversial, Congress had to get involved…