Yesterday's (Sunday's) Greek election results have ushered in a new political era for Greece. One that will certainly impact the euro in 2015. 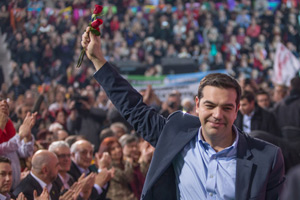 Syriza's rise began in in 2012. The Greek electorate was disillusioned. They were two years into a joint European Union-International Monetary Fund bailout program and just months removed from the announcement of a second bailout program.

In order for Greece to receive bailout money, it needed to get its fiscal house in order. But elevated unemployment met with austerity conditions that threatened social programs. It stirred up protests and social unrest. And Greek voters were staring down even more austerity measures as a condition of the bailout programs.

But such promises, if implemented, would have threatened to hold up bailout money. And this could have inevitably led to a Greek exit from the euro.

At the end of a summer 2012 election, Syriza didn't win a majority. And the New Democracy party kept a tenuous grasp at the head of the Greek government.

But the elections did severely weaken the socialist PASOK party, a fixture in Greek party politics, and the populist message remained strong.

So strong, in fact, that Syriza effectively overthrew the Greek status quo this weekend in parliamentary elections. Tsipras finally earned his seat as the head of the Hellenic Republic.

But all this does is breed more uncertainty in an already uncertain Eurozone...

What Greek Elections Mean for the Eurozone

You see, a big part of the Tsipras pledge was to restructure Greek debts that came from the two bailout programs.

Greece will exit the bailout program at the end of February.

Tsipras seems to believe that creditors will accept a haircut on these loans. But that doesn't seem likely. Greece's biggest creditor is unmoving in seeing that bailout money paid out in full.

The bailout funds were built by a large wall of euros from capital of Eurozone members. Each Eurozone member paid up capital relative to the size of their economy.

Germany is the largest economy in the Eurozone. It is on the hook for about 27% of the loan guarantee commitments from the bailout funds.

If Tsipras gets the haircut he wants, Germany will suffer a big loss.

German Chancellor Angela Merkel has pushed back. Leaks to the press in the past month suggest that Merkel is becoming more receptive to a Greek exit. That is, if Tsipras tries to renegotiate the bailout terms to the detriment of Germany.

And this is where the Greek election results leave the Eurozone.

Thanks for this great article.

Greece has major structural problems and they just elected a commie to fix them. Good luck with that. Out of the frying pan in to the fire. Leftist have always worn the dunce cap in the class of economics. But they should have elected some one who would go the free market route. They could be like South Korea or Hong Kong. Instead they will go the way of Venezuela most likely. Endemic shortages, price controls, police state surveillance, hyper inflation, censorship. I wonder how long it will take before they figure out a free market economy is the way to go. I expect Greece to repudiate their loans.

I have a question on the EUO etf that you recommend. As the euro goes down and maybe collapses what is the chance of this etf going bankrupt and every one who has invested in it losing their money ? If the euro collapses this etf cannot go to infinity so what happens then to the etf and the value of the shares people have purchased ?