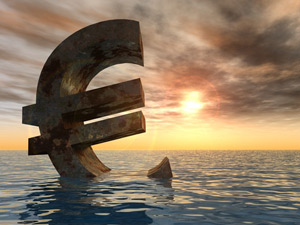 The Eurozone quantitative easing announcement has come and gone. There are a lot of headwinds on the road to QE-induced euro devaluation. But don't expect the current weakness in the euro to persist.

It's likely to bounce – soon.

That's because the last seven months of declines were built heavily on a "buy the rumor, sell the news" trading mentality – or in this case, "sell the rumor, buy the news."

You see, Eurozone inflation numbers started to suggest that the region was headed toward deflation for most of 2014. That's when European Central Bank President Mario Draghi began hinting at Eurozone QE. As 2014 continued on, and the inflation numbers failed to budge – and even turned negative in December – it was less hinting and more of an outright declaration.

The market knew Eurozone QE was coming. And that's why for seven months currency traders and speculators were shorting the currency. They were looking to take gains ahead of an inevitable fall.

The euro also collapsed against the Swiss franc after the Swiss National Bank announced it was going to let its currency float against the euro last week. For three years the SNB would buy euros and sell francs to maintain a peg of 1.2 Swiss francs to the euro. But fearing that anticipated QE measures would force the bank to weigh down its balance sheet with an ever-weakening currency, the SNB abandoned that monetary policy regime.

And then yesterday it finally happened. Draghi announced a 60 billion euro a month QE package. It's aimed at reversing the trend of demand-killing deflation.

There is long-term weakness in the euro. Greek elections are slated for Sunday, and an anti-bailout, anti-austerity, left-leaning government is likely to take over the Greek government. The far-left Syriza has toned down its aggressively populist undertones over the last two years, but a potential change in the Greek political establishment has raised the specter of a possible Greek exit from the Eurozone.

Uncertainty is rampant. And there are still more questions about the Eurozone's future as a monetary union than there are answers.

But know that the current downdraft is not permanent…

Prepare for the Snapback

"I'm still amazed at the strength of the dollar versus the euro," said Money Morning Resource Specialist Peter Krauth. "I do think that both have reached extremes and are due to reverse course."

And the technicals are not in favor of an even deeper sustained fall.

"Technical indicators are clearly pointing to at least a temporary extreme," Krauth said. "That should be enough to change the trend, even if only for just awhile."

The euro is still falling. Even with the long-anticipated QE announcement happening yesterday. But it can only be pushed so far before a snapback does happen.

So, where is the euro headed?