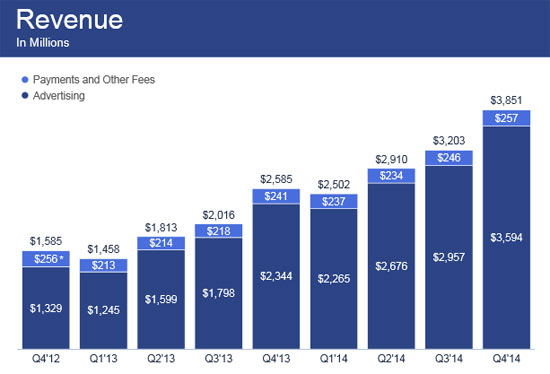 "We got a lot done in 2014. Our community continues to grow and we're making progress towards connecting the world," Facebook Founder and Chief Executive Officer Mark Zuckerberg said.

There's one reason behind FB's big turnaround, and we've been saying it for two years. In 2013, Facebook mastered an element that is crucial to social media company profits...

FB Earnings: It's All About That Mobile

"Facebook has gotten really good at advertising. It's new, it's inexpensive, and it's smartly done," Money Morning E-Commerce Director Bret Holmes said in Oct. 2013. "When Google first started, it wasn't good at advertising, and look at them now. Facebook is going to be a success story."

You see, around the start of 2013, Facebook developed a new advertising format called FBX. It provided what's called "native social ads" - ads that are seamlessly integrated into the social media's platform. It also allowed advertisers to reach FB users on mobile. 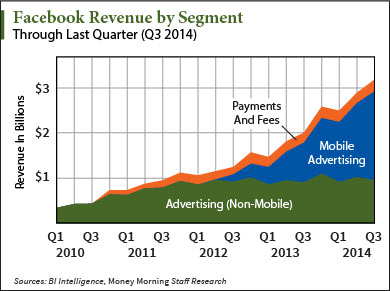 In the same quarter a year ago, mobile ads gained even more ground and for the first time accounted for more than half of all FB's ad revenue.

In Facebook earnings today, this mobile ad momentum continued. Mobile advertising revenue represented a whopping 69% of advertising revenue for Q4 2014. That's up from approximately 53% of ad revenue in the same quarter a year ago. And mobile MAUs grew 26% year over year.

The best part for FB stock investors - today's 58% revenue blowout is nothing compared with what's to come...

You see, in late 2014 on Sept. 29, Facebook upgraded its newest ad platform that will replace FBX. It's called "Atlas," and Holmes believes it will "revolutionize web advertising."