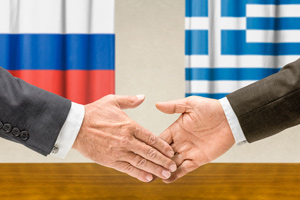 At stake in this Eurogroup meeting is Greece's solvency. The country is set to run out of cash to pay its debt obligations in the next couple weeks. Greek Finance Minister Yanis Varoufakis is pleading with the region's finance ministers to roll back some of the austerity conditions attached to a 10 billion euro ($11.3 billion) loan. This loan is the only thing that will keep Greece afloat for the next six months.

Varoufakis is a part of Greek's newly elected Syriza. This far-left party, led by Prime Minister Alexis Tsipras, won an electoral coup last month in Greek parliamentary elections. They ran on a platform of no more austerity and a restructuring of Greek debt.

The problem: Greece can't have its cake and eat it too. It wants bailout money. But it doesn't want to be subject to the European Union-imposed austerity measures. These measures were often blamed for Greece's worsening economic situation as the Eurozone financial crisis played out.

Germany won't allow this. It sees no reason why Greece shouldn't be subject to austerity. Germany has tightened its belt over the last decade. Germany is also the largest economy and holds a lot of Greek debt, so any restructuring plan will certainly put Berlin at a loss.

The popular narrative being spun out of this is that Greece is powerless. Either it accepts austerity conditions or leaves the euro.

After all, the other at-risk Eurozone members who sought bailouts at the height of the Eurozone crisis - like Spain and Portugal - successfully exited their bailout programs with little fuss.

The Eurogroup is more receptive to a Greek exit now than in 2012, when concerns a "Grexit" would spark a mass exodus of the weaker Eurozone countries from the euro. That would in turn threaten Eurozone credibility and shake the confidence in this single currency bloc project.

In the eyes of many, Greece has no leverage. In a confrontation between Germany and lowly Greece, Germany always wins.

Failure to keep Greek debt talks cordial could unwittingly lead the EU into a standoff with Russia.

Greece has already shown its willingness to play nice with Russia. This is at a crucial time as the EU maintains sanctions against Russia for military adventurism in neighboring Ukraine. Any breakdown of talks between the Eurogroup and Greece could send Athens into the arms of Moscow.

"What we want is a deal. But if there is no deal - hopefully (there will be) - and if we see that Germany remains rigid and wants to blow apart Europe, then we have the obligation to go to Plan B. Plan B is to get funding from another source," Greek Defense Minister Panos Kammenos told a Greek television show this week before today's Eurozone meeting, Reuters reported. "It could be the United States at best, it could be Russia, it could be China or other countries." (Emphasis added.)

Why does Russia want to cozy up to Greece? It all comes down to energy interests.