Dice Holdings: About the Company

Dice Holdings traces its roots to a company called Data Processing Independent Consultants Exchange, which launched in San Francisco in 1990. Originally it was a consulting firm for recruiters and technical contractors. In 1996 the company transitioned to the Internet and acquired the address "dice.com." Earthweb, which provided career development resources to IT professionals, acquired Dice in 1999. The deal moved the headquarters to New York. Two years later the parent company changed its name to Dice, Inc. The company went private in 2003, and started to acquire other job search companies. Dice became public again with an IPO in 2007. And it kept buying companies; it has made 11 acquisitions since 2004. Today Dice Holdings operates job web sites around the world that specialize in industries such as tech, financial services, security clearance, healthcare, hospitality, and energy. It makes money by charging companies to list on these sites, where they can target the exact type of workers they need. Dice also runs targeted job fairs. The company employs about 830 people. Dice has a market cap of $465 million.

Dice Stock: Why It's Oversold 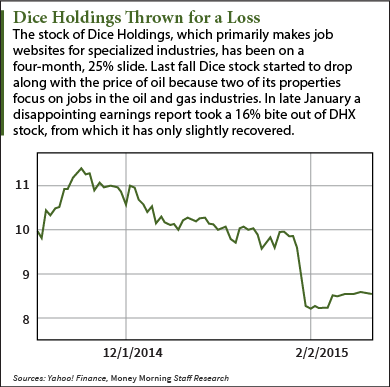 Dice stock is down 25% since last November. The first leg of the fall began in response to the drop in oil prices. That sounds crazy, but two of Dice's job websites, Rigzone and OilCareers, focus on the energy sector. When it became clear oil companies would need to scale back in response to the decline in oil prices, DHX stock began to feel sympathy pains. That took 13.4% out of the Dice stock price. Then Dice reported earnings on Jan. 27. The company slightly missed on both income and revenue. But guidance was the real kicker. The company forecast for 2015 earnings was several cents lower than what analysts had projected. On top of that, the company said margins would contract in 2015. That flurry of punches dropped Dice stock 16% over the following three trading sessions. And aside from disappointing Wall Street, investors also are worried that the growth of LinkedIn Corp. (Nasdaq: LNKD) will come at the expense of the sites that Dice runs.

But investors have misread what's happening with Dice...