Even though we're in the middle of March Madness right now, I'm not going to talk about this year's "Cinderella" teams, which come out of nowhere and make it to the Final Four in college basketball.

No... the real Cinderella story is happening at U.S. box offices. A simple Disney remake of the classic film managed to gross over $70 million in one weekend earlier this month. There's clearly investment potential in this success.

Let's take a look at Disney's Cinderella story and let its magic bolster our investment profits.

Who besides Walt Disney Co. (NYSE: DIS) could take a remake and turn it into last weekend's second-highest grossing movie?

The special effects, and what Disney's Pixar Animation Studios did to revamp the movie, are what made it great (I know, I watched and enjoyed it). The film could well win some awards for its digital effects and it was no surprise to me to see it doing so strongly.

Is there a similar Cinderella story when it comes to DIS stock? 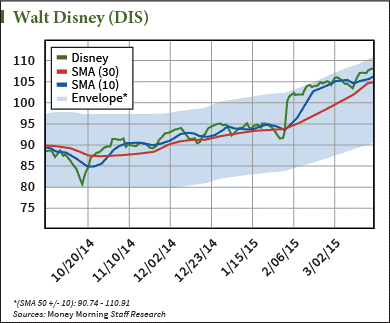 The higher DIS stock price climbs, the more these two moving averages will separate, which is a tremendous bullish sign. The technical term "enveloping" is another way to take a moving average and create a range from it. The chart above also has a 50-day moving average, indicated by the blue shading, with a + and - 10% range. Shown here, it represents enveloping. Right now DIS is on the upper side of this envelope channel, meaning that it could see some pullback soon. It's possible that 90 (the bottom of the envelope at present) could be price support and the stock continues to have upside momentum.

Speaking of momentum, recently Disney broke above the $107 resistance, trading as high as $108.94, perhaps behind momentum from the film's pre-screenings.

Moving averages, (MA) while not creating momentum, are one way to gauge it. A moving average is created by using past data and then averaging that data over time within a window of time that "moves" along with the calendar.

It's all leading up to some great profit opportunities...

Tom, thanks for the timely report on Disney. I think you just smashed one out of the "ball park" on this report. Options choice looks very interesting so say the least. I think you ripped the cover off the ball. Excellent job.
Mike from Indiana

why not sell a put on Disney?

Wouldn't farther out be safer?