I’ve talked to thousands of investors over the years who are absolutely convinced that they need to understand the market’s most complicated nuances to get ahead.

In reality, though, success comes down to just five things that I call the Total Wealth Principles.

Get ‘em right and you can make more money with less risk while enjoying a peace of mind that the vast majority of investors will never have. I know that sounds like a tall order, but it’s not. Or, at least, it doesn’t have to be.

You see, most investors fight the markets instead of going with the flow. And in doing so, they doom themselves to pathetic returns that do nothing but pad Wall Street’s pockets.

I want you to understand these five Total Wealth Principles because they will help you harness the awesome power of the markets themselves. Then you’ll have the perspective needed to build the financial future and, specifically, the profit potential that you so richly deserve

Especially now, when weak economic data is building yet another wave of panic among the 99% of investors who will never understand what I’m about to share with you.

Here are five Total Wealth Principles to invest by – and pitfalls to avoid.

I often joke during my presentations around the world that we are all born with common sense… and that it’s just bred out of us as adults. Usually that gets a good laugh, especially since we’ve all touched the proverbial “hot stove” at one point or another in our lives despite knowing better.

Nowhere is that more clear than when it comes to money.

That’s why investors assume that whatever is happening right now is going to happen in the future. It’s also why millions try to find patterns in random data that they believe are meaningful, while ignoring the information that actually means something.

Case in point: history. Data show very clearly that the markets have a tremendous upside bias over time. There are all kinds of reasons, but really it comes down to the fact that there is a constantly increasingly supply of money chasing a finite number of stocks. So prices increase.

If this doesn’t make sense, think of it by imagining eggs at the grocery store. If there are 1,000 eggs and only one shopper, the price of those eggs will be pretty darn low. But if the situation is reversed and there are 1,000 people who want the last egg, the price will go through the roof.

So why is it that investors panic and do exactly the opposite of what they should be doing?

Simple… because they don’t understand what I’m telling you: namely, that capital is an expansive force. By its very nature, capital ties into the growth of the companies that make up today’s markets. Growth translates into revenue, revenue to earnings, and, ultimately, earnings into higher share prices.

Ergo, bear markets are not the excuse to run for the hills that everybody thinks they are. They’re nothing more than a short-term event that does not mitigate the larger, longer-term picture.

I realize that runs counter to conventional wisdom, but hear me out.

Even the dot-bomb blowout and the Financial Crisis of 2008 are nothing more than speedbumps in the grand scheme of things. In fact, if you had bought a fund tracking the S&P 500 on July 1, 2007 – the point at which it reached an all-time high before the Financial Crisis began – and held those shares, you’d still be sitting on total returns of more than 31% today.

To be clear, I’m not advocating “buy and hold.” What I am trying to demonstrate is that you can buy at an absolute peak and still have double-digit potential if you have the right perspective. Buy and “manage” is always a better way to go.

I want you to understand that periodic downturns are a fact of life. More to the point, bear markets are normal because what they really signify is opportunity in the bigger picture.

Buy low and sell high is how the game is most profitably played – especially when you confine your investments to growing companies in Unstoppable Trends like we do.

Total Wealth Principle No. 2: Be mindful of markets’ “reversion to the mean.”

Mean Reversion (in financial terms) states that stocks have an average rate of return, or movement, that they will deviate from and then return to over time.

For example, if stock ABC has historically returned 7% on average over the last 50 years, but it returns 15% this year, traders can reasonably – though not always – expect the stock’s price to record smaller-than-average growth the following year, to bring its growth for that period more in line with its mean return.

Of course, sometimes companies see “game changers” that enable the stock to see improved returns that are not just sudden, but sustainable. That means stocks can experience a breakout (Tesla in 2012, Jazz Pharmaceuticals in 2009) from which there is no reversion to the old mean – merely the establishment of a new one.

Of course, this works in reverse, too. Stocks can see death blows that result in an unrecoverable decline. Take RadioShack, Blackberry, or even Kodak, for instance.

My point is that understanding whether you are above or below the trend line can tell you a lot about whether short-term market conditions favor buying or selling.

If you’re significantly above trend, the markets favor a retracement lower. If you’re below trend, an upward move. 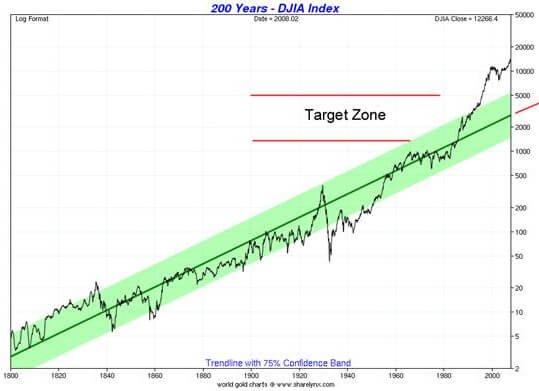 It all comes down to perspective.

Total Wealth Principle No.3: Beware of the market timers.

Understanding the historical returns of the markets and having a good understanding of whether a correction or bull run is likely should never be confused with market timing.

People who try to time the market – buying when they think the market has hit a nadir, or selling when they have a feeling it won’t get any higher – are wrong a staggering percentage of the time.

Nobel Laureate William Sharpe observed in a 1975 study that a market-timer would have to be correct 74% of the time to outperform a simple index fund. SEI Corporation updated Sharpe’s work in 1992 with a much longer time frame, dating from 1901 to 1992, and found that timers would have to be right a staggering 91% of the time.

But that doesn’t stop people from trying and, I might add, with predictable results. It’s no coincidence that DALBAR data shows that the average investor who tried to time the markets achieved an annualized return of just 2.53% for the 20 years from 1993 to 2013, in contrast with the average annual return of 9.02% that the markets generated over the same time frame.

How do you calculate the appropriate number for a trailing stop?

What percentage do you like to use for your trailing stops? I want to learn more about selling options, can you recommend a good book or course that doesn't cost a fortune?
Any information is appreciated.
Sincerely,
Sheila Terry

Trailing stops can be difficult to calculate because the percentage changes as share prices and market conditions change. A lot of it has to do with your own risk tolerance, but there are ways to "optimize" your trailing stops.
You should take a look at TradeStops, a service Money Morning Partners with, that automatically calculates trailing stops on a continual basis.
You can find out about the Money Morning Member deal with TradeStops here: moneymorning.com/your-member-benefits/
Hope this helps.