The most apparent changes always happen outside of the house, and within a few months the house transformed as a pool, a patio, and even a sunroom became (welcome) additions. Indeed, so much changed that the neighbors around us started to talk.

You see, most people don't like change – but I welcome it.

Indeed, as traders, we actually need change in order to find a potential to profit.

And in the case of my new neighbors, changes led me to an opportunity to double up on an investment in the world's most important currency…

I decided to meet this new neighbor of mine while he was hosting an outdoor party. Come to find out, he was like a lot of "Floridians," a European who owned property in Florida while still residing in Europe.

He grew up in Greece, and like most Greek families, he invited my family to his house and showered us with food, drink, and conversation. Our conversation started with talk of family, then work, ultimately leading to the stock market.

He asked me two questions that got me to thinking about a great opportunity for those interested in riding the rise of the U.S. dollar.

"I don't understand," he first said. "How is it that the stock market, the bond market, and the U.S. dollar are all going up? That's not supposed to be, right?" he added.

Economics 101 tells us that the flow of money cannot go into everything at once, and typically money that comes out of stocks goes into bonds and the U.S. dollar. And when the stock market is booming, typically it comes on the heels of a falling U.S. dollar.

Think about it for a moment. Our economy might not be growing at a blistering pace, but it's outpacing the world right now. World headlines are rife with recessions, energy crises, and tales of raging insurgencies and wars. All of which push fearful foreign investors toward U.S. stocks, U.S. treasuries, and the U.S. dollar. And many investors believe that the rise in the U.S. dollar hasn't reached its peak potential yet.

So how can we take advantage of the growing trend in the greenback without getting short changed?

It's easier than you think…

Doubling Down on the Dollar 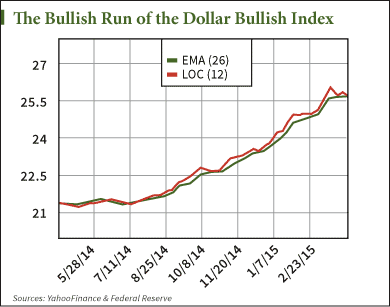 PowerShares' Dollar Bullish Index was created to offer leverage in various assets, and I think for currencies they make sense since we see little day-to-day movement of them.

The chart above reflects UUP shares went up markedly over the last year. It has gone from $21.50 per share to as high as $26.50 per share recently, or a 24% increase during that time frame. That represents roughly a 12% increase in the U.S. dollar.

Our target on this index for the remainder of the year is $28 to $30, which when first looking at it is another 10% to 15% move. As an option trader however, I am looking for more than just 10%.

I typically look for a minimum of a double in my option investments.

And I believe this trade sets up as a dollar double for a $.50 entry price.