The Etsy (Nasdaq: ETSY) stock price range for its initial offer is set at $14 to $16 a share. The Etsy IPO will debut this week and become the biggest IPO from a New York-based company since 1999.

According to Bloomberg, Etsy's $250 million deal will put "New York tech back on the map." The deal is diverting attention away from Silicon Valley toward the New York startup scene. The last tech company from New York to raise more than $250 million was Barnesandnoble.com during the dot-com bubble.

Here are three other startups from the Big Apple – and how their prices stack up against the Etsy (Nasdaq: ETSY) stock price…

How the Etsy (Nasdaq: ETSY) Stock Price Compares to Other NYC Tech IPOs

The most recent New York tech IPO that made a huge splash was OnDeck Capital Inc. (NYSE: ONDK). 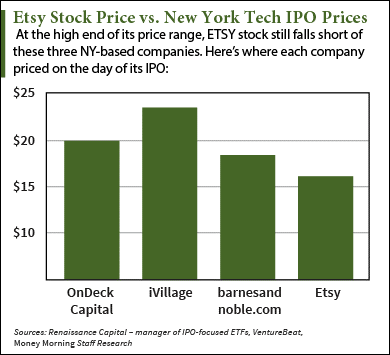 OnDeck is an online loan platform that has issued over $1 billion in small business loans. These loans range anywhere from $5,000 to $150,000.

ONDK stock made its debut last December. The IPO priced well above its $16 to $18 range at $20 a share and raised $200 million. The company commanded a hefty market cap of $1.32 billion, making it the biggest IPO of any New York tech firm since 1999.

"There was a branding element to this," said OnDeck CEO Noah Breslow to Crain's New York Business. "Most small business owners haven't heard of OnDeck. We think being publicly traded, with all the transparency around that, is something our customers will want to see and will respect."

The Etsy IPO Is Different than Any Other Tech IPO… The company is more dedicated to social consciousness than business growth, which is troubling to Wall Street investors. That raises the question – is the Etsy IPO valuation justified?