Some of the best ETFs to buy in 2015 help investors get a piece of a very lucrative trend: mergers and acquisitions. 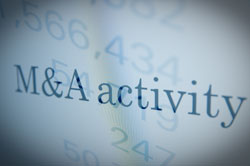 The collective total of global M&A announced year to date eclipsed a whopping $1 trillion through the first week of April, according to Dealogic.

At the current pace, M&A activity is on track to exceed $3.7 trillion in 2015. That would make this year the second biggest for deal-making since 2007. A total $4.3 trillion in deals was inked that year.

Deals announced so far this year are both numerous and hefty in size. Fifteen of this year's deals carry a price tag of more than $10 billion. That's the highest on record, Dealogic reports.

These latest deals further stoked hopes that more transactions are on the horizon.

It's never wise to buy a stock purely based on takeover speculation. But dedicating a small allocation to this strategy affords a way to play merger mania with less risk. And ETFs offer a great way to do so.

Following are two of the best ETFs to buy to get exposure to the lucrative M&A market. Both ETFs have bested the year-to-date gains for the Dow Jones Industrial Average (1.6%) and S&P 500 (2.24%) - one by a wide margin.

Best ETFs to Buy to Profit from M&A Activity

The fund's goal is to achieve capital appreciation by investing in global companies for which there has been a public announcement of a takeover by an acquirer. The approach is based on a passive strategy of owning certain announced takeover targets. The aim is to generate returns representative of global merger arbitrage activity.

This next ETF is crushing the broader market in 2015...