It would be the largest healthcare deal of 2015. Teva officials said the offer was worth $82 per share and would be a 50/50 combination of cash and stock.

Combined, the two firms would have revenue near $28 billion. That would make the company the ninth-largest pharmaceutical company in the world based on revenue.

Here's a look at the top 10 big pharma companies globally: 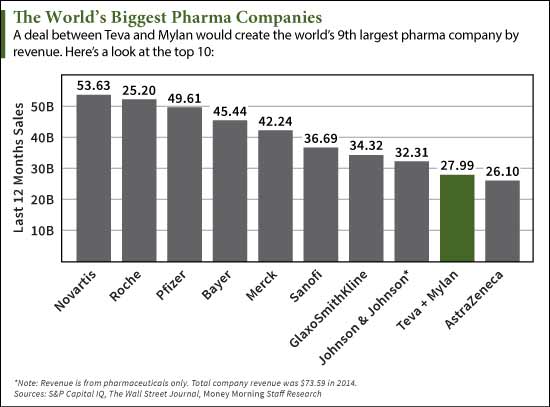 Teva is an Israel-based pharmaceutical company that develops generic drugs in all categories. It's best known for its multiple-sclerosis treatment Copaxone.

A generic version of Copaxone was just approved by the FDA this week. It's expected to eat into the company's revenue. Copaxone currently accounts for roughly half of Teva's profits. Acquiring Mylan would help Teva strengthen its product portfolio.

Mylan is also a generic drug company and is a major rival to Teva. The allergic-reaction treatment EpiPen is the company's best-known product.

Mylan officials already announced that they will reject the offer, but that doesn't mean a deal is totally dead. Teva directors could still push for a hostile takeover of the rival firm.

This week's bid is part of a growing trend of M&A activity in the healthcare sector. In 2015, $175.6 billion has already been spent by big pharma companies on mergers. That's after nearly $278 billion was spent in 2014.

And there is an excellent way for investors to profit from that M&A boom.

Big Pharma Companies Are Merging - Here's How to Profit