The aim of the 348-page report, which was ordered by a Presidential Memorandum in January 2014, is to help the U.S. government create a "comprehensive and integrated energy strategy" by identifying the roadblocks to providing affordable and secure energy and energy services for the country.

The QER's concerns mirror those I have considered in Oil Energy Investor and even addressed before the queen's Windsor Energy Consultation last month at Windsor Castle outside London.

And as the severity of the problems outlined in the QER become apparent, there are going to be some very nice opportunities for investors to profit.

However, the report neglected to address a number of key issues that are crucial to understanding the challenges in the energy sector.

Here's my take on what really needs to be fixed...

There Are Three Looming Crisis Points

The QER, which will see a regular release, will have its own multi-departmental and agency task force charged with making policy recommendations. The government's intention here is to meet a need I have demanded we fill for some time: the development of a genuine national energy plan.

Highlighted in the government's treatment are detailed indications of a crisis fast approaching in three areas:

But there are many very important factors the report does not consider. Of this rather long list, there are four I would emphasize here at what I hope is the first stage of a long and serious process.

The Report Doesn't Look at the Global Situation

First, nothing outside the U.S. is considered. Such is to be expected; this is, after all, a domestic policy report. But given the integrated nature of the global energy system, what is occurring elsewhere will have a decisive impact on what is done within America's borders.

The global crisis is far worse and dovetails into some of our most pressing security and terrorism concerns. At current projections, a widening percentage of the world's population will be cut off from any access to energy, literally living in the dark...

...And easy prey for whatever radical movement comes by.

As I discussed in my Windsor briefing, there will be a huge global price tag to avoid international infrastructure collapse.

My estimate of essential requirements to avoid a "World Collapse Scenario" is $2-$5 trillion by 2035 in targeted areas. Currently, there is a 40% shortfall; investment is down despite long-term funding supply expanding.

The International Energy Agency (IEA) Projected Need stands at $48 trillion (in the agency's New Policies Scenario - $40 trillion for energy supply, $8 trillion for improved efficiency). The need increases to $53 trillion with the so-called "450 Scenario," which seeks to limit the global increase in temperature to 2 degrees Celsius.

At current projections, we are moving toward merely buying a Band-Aid to patch over the troubles in the existing global energy network with approaches tied to national and corporate debt limitations. Put simply, most of the world will be unable to cope without massive population and lifestyle disruptions.

This is the slide I used at Windsor to break down what the IEA regards as required through 2035: 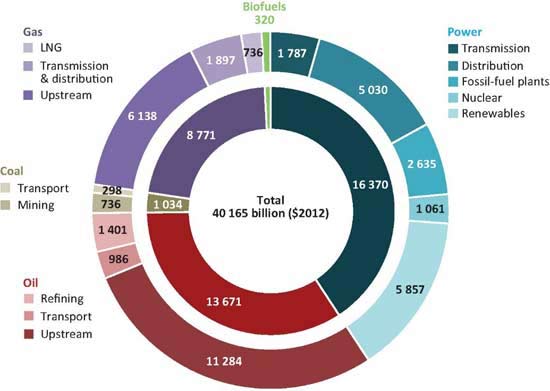 Rising energy demand is progressively moving away from the developed industrial nations to the developing world, as another of my presentation slides graphically indicated (once again using the IEA's New Policies Scenario): 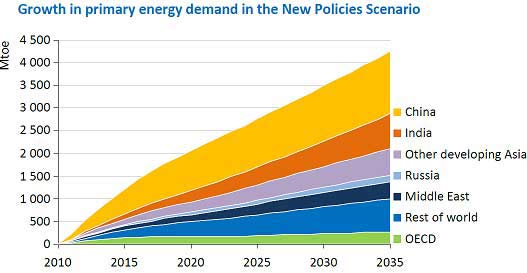 However, the most significant conclusion is this: Less than 50% of the infrastructure needs are to meet increasing demand. Most are to offset declining energy production. As we move forward, it is energy supply that will require the greatest commitment. For example, I estimate that as much as 80% of future capital needs in oil and gas will be upstream - that is, at the production or generation point - not in the TSD addressed by the QER.

How to Avoid Going over the Cliff

As an individual investor we need to prepare for what is actually in the cards.
At some point, we need to see what the movers and shakers will do, and position ourselves to profit along side the likes of Warren Buffet with the expansion of oil by rail regardless of whether we feel that the nation might be better served by the building of Keystone XL.
Every thing has a season, and if we can reliably place our investments, we can do well.

Do you see the political will to make these major infrastructure investments?

I can't see a for-profit corporation doing that kind of spending.

are you serious ? corps spend millions of dollars lobbying to get billions back where do you live under a rock ?

Kent, thank you for an accurate and informative analysis of future energy needs and the requirements of meeting them. Unfortunately these projections are based on a fatal flaw. The worlds scientists are in complete agreement that our survival as a species is dependent on a cessation of the use of fossil fuels. Not a move to natural gas, not moving from rail transportation to pipelines, but a cessation of the use of fossil fuels.
Until world leaders establish that as a premise for the development of energy production and distribution all plans are doomed to failure. And we had better accept that very soon.