The Alibaba earnings date is set for May 7. The company is expected to report earnings per share (EPS) of $0.43 and revenue of $2.78 billion.

But with the Alibaba Group Holding Ltd. (NYSE: BABA) earnings date just around the corner, some investors are worrying about a recent statement from the company's founder Jack Ma. 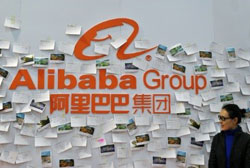 This week, Ma said his company "has really developed too quickly." He's starting a hiring freeze that will last through 2015.

The news has hit BABA stock, which has fallen nearly 3% from Monday. It closed at $82.45 Wednesday.

Now investors who heard so much about BABA's potential leading up to the record-breaking $25 billion IPO are wondering what to do with the stock.

Here's the deal: Despite the recent hiccups, Alibaba stock is one of the best long-term buys on the market today.

In fact, Money Morning's Defense and Tech Specialist Michael Robinson says Alibaba "could be the single-greatest wealth opportunity of our lifetime."

Three Reasons to Be Bullish on Alibaba Stock Now

The first reason to be bullish on Alibaba is its home market. 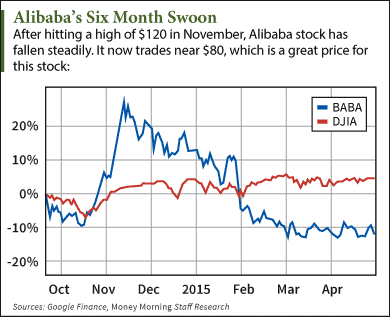 The market is growing too. The management consulting firm AT Kearny estimates it will be worth $718 billion by 2017. A recent study by the China Internet Network Information Center (CNNIC) determined the number of Internet users in the country will hit 800 million by 2016 or sooner.

The second reason to be bullish is Alibaba's mobile push.

What do we do with Yahoo?

Hi Kyle, I am confused . Senator Paul is projecting a (currency collapse) . He states that any investment (in dollars) is subject to major losses. I would love to buy Alibaba but why bother if we have this major catastrophe coming down the highway? Could you please get back to me on this.

There is about 15 analysts who promoted ALIBABA has it would be a great investment, it took me 6 to 8 weeks before buying, result 35 to 40% decline. Nobody ever talked about them since the beginning of the decline EXCEPT today, finally some explanations, it will give what it will give but at least it is something. Where are the other ones.