We don't know exactly when the Xiaomi IPO date will be, but one thing is crystal clear.

When the Chinese smartphone maker does go public, Wall Street will gobble up shares of Xiaomi stock. 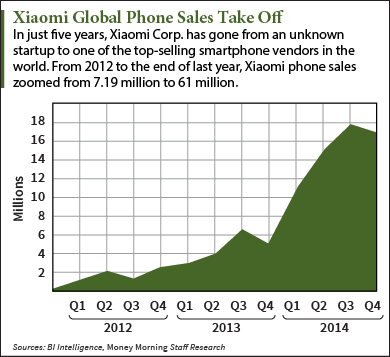 Every aspect of this company says it's ripe for an IPO, even though the company has said it wants to stay private for a while longer.

Russian billionaire Yuri Milner, who invested in Facebook Inc. (Nasdaq: FB) back in 2009, thinks Xiaomi's valuation could hit $100 billion. Milner's DST Global has been investing in Xiaomi since 2012.

"I was attracted by the size of the opportunity ahead of them," Milner told Bloomberg in December. "I don't think there's any company that has reached $1 billion in revenue as fast as Xiaomi. In every conceivable benchmark, it's almost unprecedented in terms of its speed of growth."

It's also very likely that a Xiaomi IPO will take place in the United States, either on the New York Stock Exchange or the Nasdaq.

The probable Xiaomi stock symbol is "MI," as the company uses the "Mi" moniker extensively in its branding.

Meanwhile, almost everything the company has done has served to whet an investor's appetite for the eventual Xiaomi IPO - take a look...

Thanks for the report David on the next super mega star that may even perhaps eclipse Apple's unprecedented success. ( ?… Is it possible ?). The Chinese certainly know how to kick up a notch! Some one pinch me. Please keep the reports coming.

Not sure if Xiaomi will ever eclipse Apple, but it's clearly a rising star in the tech world. It will be a household name eventually.

I don't see an IPO that imminent. Shanghai or Hongkong would be where they list. The company uses a direct sales model that isn't competitive among us contract based phone models. Even if they sell their products at a lower price, unless they switch to the American standard of a payment plan attached to a contract, not many people will spend the upfront money.

Basically the US market is too small for them to care about. They know most people will not want their phones, and would prefer to focus on the Asian market. I see this being the case for at least another 2 years.