Apple's most recent earnings were nothing short of spectacular, and the headlines reflected that:

What they should have said is "Analysts Got It Wrong Again."

We've talked in the past about how far off the mark Wall Street analysts can be, and how costly that can be for investors who blindly follow along. It's no surprise - or at least it shouldn't be - given the hidden biases Wall Street holds.

But we haven't talked about how to use that information to your advantage.

Here are the two best presents analysts could possibly give you this earnings season.

Not many people realize it, but analysts' opinions are very short-term in nature. They're intended to reflect market potential over the next 30 to 60 days. They're also aimed squarely at institutional investors who are likely to move into or out of specific holdings at the blink of an eye. Not individuals.

It makes no sense, for example, that Boeing reports quarterly numbers when its products are sold over a multiyear sales cycle. Nor does it make sense that a company like Alibaba gets a 17% haircut at a time when it reports EBITDA (earnings before interest, taxes, depreciation, and amortization) of only 58% at a time when it grew by 40% year over year.

Most CEOs would give their right arm to have that problem, yet Wall Street has gone to great lengths to convince investors that growth at any cost is a better approach than having real products with real profits.

What you need to understand is that most analysts are great at seeing the trees but not the forest. It's not uncommon for them to miss the bigger picture. They are so myopically focused that they can't see what a company is really doing, nor can they understand an opportunity that takes them beyond what they already think they know.

Especially when there are real products involved in markets that are changing quickly.

Analysts Punished This Stock - and Cleared the Way for 74.76% Gains

I recommended the company to Money Map Report subscribers as a way to play the fastest-growing sector of the global food industry: the demand for organic food. At the time, it was almost completely unknown and unfollowed. The company's fundamentals were stellar: they had no debt and double-digit earnings growth year over year, with an aggressive expansion plan in the works. Readers who followed along had the opportunity to make gains of 43.37% in less than seven months.

Then, just months after I recommended that my Money Map Report readers capture those profits by strategically exiting the trade, traditional analysts got to the stock.

But the company forecast comparable store sales growth of 5.5% to 6.5% going forward, down from the 8.5% to 9.5% improvement analysts were "expecting." The result was a 36% plummet in the stock price that day, even as the company recorded strong growth in almost every other metric imaginable.

While headlines lamented the "decline," savvy investors loaded up. Anybody who missed NGVC's double digit run the first time was handed a second chance on a silver platter. 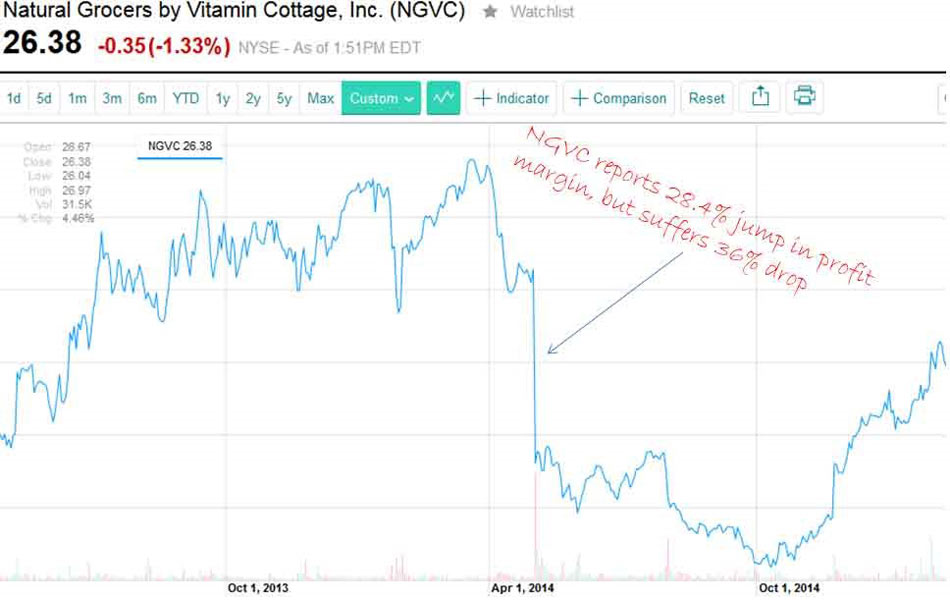 This is by no means an isolated situation. Analysts frequently create "expectations" that result in great buying opportunities.

Alibaba, for example, was in much the same situation last January when it got tanked after missing EBITDA by 2% despite reporting year-over-year growth of more than 40% and profits that Amazon would love to have.

Today the stock trades at $85.08, down from a 52-week high of $120 a share. It's a compelling bargain for anybody who understands that the average quarterly earnings growth rate is now projected at 80% at a time when the forecasted quarterly revenue growth is 30.87% according to the Financial Times. The company's profit margin is 38.09% and its return on equity is 29.54% according to Yahoo! Finance.

If Alibaba - with real products, real cash flow, and billions of consumers using it - is even half as profitable as I envision in the years ahead, every quarterly report that "misses" is going to be the financial equivalent of an engraved invitation to buy more over time.

I call this phenomenon the "analyst opening" because that's what they're really creating... a king-sized opportunity for you. They're opening the proverbial door for profits. All you have to do is have the knowledge and the chutzpah to walk through it.

Here are two more ready-made "analyst openings" for your consideration.

Chipotle Mexican Grill Inc. (NYSE: CMG) reported Q2/2015 earnings on April 21, 2015. By all standards, it was a sterling report. Revenue increased by 20.4%, crossing the $1 billion threshold for the first time. Net income clocked in at $122.6 million, which is a staggering 47.6% increase. Diluted earnings per share were also up 47%.

Best of all, the store announced it had opened up 49 new restaurants over the quarter. That's terrific evidence that Chipotle is following through with a sweeping expansion plan.

Yet, the stock tanked 7.5%. Seems analysts weren't impressed by the 10.4% growth in same-store sales that Chipotle reported. They had predicted 11.8%.

The way I see it, now's a particularly exciting time to get in on Chipotle. Not only is the stock at a discount, but the chain recently made news by becoming the first major fast food operator in America to denounce genetically modified food (GMOs) and remove them from all ingredients in every product it sells.

This is a huge step forward in the organic food sector which is now a $100 billion market with a compound annual growth rate of 14% a year according to Information Resources Inc. and SPINS. It's also a massive crowd pleaser if for no other reason that millions of people are tired of eating ingredients they cannot pronounce.

The most celebrated new burger company in America isn't due to report its earnings until mid-June, but it's still riding high from the overreaction to its last earnings report. Too high.

In March, Shake Shack Inc. (NYSE: SHAK) reported a net loss of only $0.01 per share. That's impressive for a new company that's still spending very heavily on research and development, and even more impressive when you contrast it with the $0.03 per share loss analysts were predicting.

Shake Shack's stock has been on fire since analysts were found to have lowballed it. Now, though, it's got the opposite problem in that it's insanely overvalued.

The stock currently has a price-to-earnings (P/E) ratio of 982.71 according to Yahoo! Finance. To put that in context, that's 11.56 times the average 84.95 PE ratio the rest of the restaurant/dining sector sports! If that doesn't give you pause, what this number means in plain English is that you'll have to wait 982.71  years to make back any money you invest in the company today based on current earnings and price.

I think Shake Shack analysts have created a prime shorting opportunity. Even if Shake Shack surprises analysts again in June, history shows very clearly that its lofty PE ratio simply isn't sustainable, any more than Twitter's stock price of $70 a share was in January of 2014 when I recommended Money Map Report subscribers short it under similar circumstances.

Shake Shack is due for a shake out.

In closing, I've obviously been tough on traditional analysts to the point where you might wonder if they're all worthless. They're not. In fact, many are really intelligent people. They're just trapped by a system that wants to separate you from your money.

Never forget that the key to Total Wealth is to do what Wall Street does... not necessarily what it says.

Keith,
According to your article, is this a good time to buy Chipotle, especially given that the PE is well below the average for restaurants?