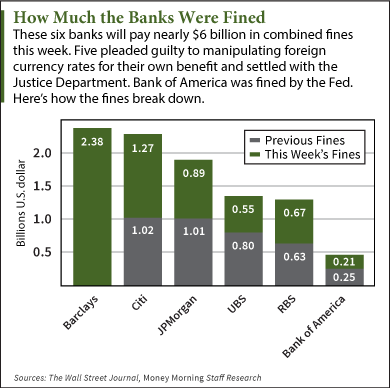 The latest crime was exposed Wednesday. Five of the biggest names in global finance agreed to pay billions to settle lawsuits alleging they illegally gamed the $5 trillion-a-day foreign exchange market.

A sixth bank, Bank of America Corp. (NYSE: BAC), will pay $210 million after being fined by the Fed.

With this week's settlements, big banks have now paid more than $60 billion in fines over the past two years.

Of course, history dictates the fines will have no actual effect on business practices.

"We all know the big banks are above the law," Gilani said. "They are convicted, they admit their guilt (sometimes), and no one goes to jail – they just pay more fines."

Not including this week's, just look at a few of the settlements too-big-to-fail banks have shelled out in the last five years alone:

But the fines don't stop banks from breaking the rules. Instead, the cost of criminality is built into the global financial institutions' balance sheets.

The $5.7 billion the five banks paid out on Wednesday represent the earnings of about a day or two for each bank.

The $5.7 billion the five banks paid out on Wednesday represent the earnings of about a day or two for each bank.

"Too-big-to-fail banking is just a super highway toll road paved with manipulation, fraud, and criminality that leads to egregious profit," Gilani said. "But then again, why would Washington ever pull any big bank's license to do business? They wouldn't, because then they couldn't sit by, watch the banks commit crimes, and tap them on their shoulders and smile at them."

The acts of these Wall Street criminals have had no significant impact on the firms' stock performance. Nor does Gilani expect there to be.

"The only reason you might want to stay away is to avoid the sinking feeling that you are helping fund their legal reserves. And potentially fraudulent behavior," Gilani said.

You might be losing money every day: Every investor is hard-wired to do three things that kill returns. Do you know how to avoid them? Find out what they are, plus the single-best investment strategy for maximum gains, in our free guide: Make 2015 Your Wealthiest Year Yet…

… as a member, an observer, i am with you guys…. it was, it is, very easy for them to exercise the old saying?… "to suit themselves"… they know the risks,… but because they have got "deeds & titles",… as well as the most powerful component called "money?"… THERE YOU GO?… another saying!.
… add them all up!!… UNFAIR!.

"A banana republic run by Wall Street criminals." Spot on!

Look no further than the evening of November 21, 1963, where LBJ, Dick Nixon, J Edgar Hoover, and others gather at the home of Texas oil magnate Clint Murchison. The Secret Service records will say LBJ spent the night at his hotel with Ladybird, but this was the same detail that partied at strip clubs till 5 a.m., led our President to his slaughter, and then helped clean up the crime scene. LBJ's mistress said she was surprised to bump into him at Murchison's, whose good friend DH Byrd, by the way, was the owner of the Texas School Book Depository. LBJ promised her "after tomorrow those goddamned Kennedys will never embarrass me again."

Sure enough, he was right. And how fortunate for him, because instead of being exposed by the Bobby Baker and Billie Sol Estes scandals for profound corruption and even murder, he got to become President. And how lucky for Murchison that he and his buddies got to keep the oil depletion allowance Kennedy wanted to terminate. And how fortunate for the military that it immediately got its war in Vietnam.

Was it just coincidence that the interagency phone system went down in Washington at the same time as the assassination, the B-52 crews discovered their nuclear codes missing, and the plane of Chairman of the Joint Chiefs of Staff Curt LeMay was rumored to have crashed in Canada during a hunting trip there?

And how fortunate for the CIA, which Kennedy wanted to smash into a thousand pieces. Nixon wasn't the only one who couldn't remember what he was doing when he heard of the assassination on Nov. 22. The CIA's control officer for the Bay of Pigs, GHW Bush, also couldn't remember.

It's been over 50 years. The Soviet Union is gone and unlamented. Castro is on his deathbed. And yet "our" government still won't release all of its records regarding the assassination.

"Pay no attention to the man behind the curtain," we're told.

Thanks for having the integrity, courage and honor to remain an agent of truth.

…Finally?… but was it really, Russia's out of there?… i must put my mouth where my mouth is…
… even though the collapsing of Wall Street?,… America saved by it's own people?… how?, there were, and there are plenty of wise men in America?… "private sector,"that's where most of the nations money!! sitting?… despite the fact,they cheated as well for sure!!.

Yes the Largest Banks and Mortgage Services in our United States of America for many years have been WRONGFULLY FORECLOSING and Taking away our homes that we the citizens on this country work so hard to keep…Our Judicial system, and Attorneys that process these foreclosures are nothing but Foreclosure MILLS and FRAUDSTERS BUT GOD has the last say concerning ALL these so call $1,000 wearing Suited Clowns knowing the financial institutions they represent are not the party of interest secured against our homes and furthermore our original notes and mortgages were insured and paid off and they don't even have authority of our original creditor at all