So how does the Fitbit valuation compare to other popular tech IPOs that have hit the market in the last year and a half?

This chart shows the pre-IPO valuations of the biggest tech deals since Jan. 2014: 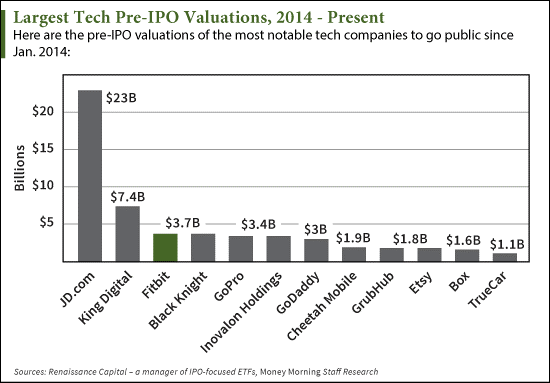 The chart does not include Alibaba Group Holding Ltd.'s (NYSE: BABA) $175.5 billion valuation. The Chinese e-commerce behemoth dwarfed other tech IPOs in September 2014 when it became the largest U.S. IPO of all time by raising $21.8 billion.

Without Alibaba, the Fitbit valuation ties Black Knight Financial Services Inc. (NYSE: BKFS) as the third most valuable tech IPO since the start of 2014.

Fitbit's market value is high because it's one of the few tech companies that is profitable before going public.

Fitbit's huge returns are a direct result of its dominant market share. In the first quarter, Fitbit's products made up 85% of fitness-related wearable tech devices in the United States. Research firm NPD Group reported Fitbit has sold a total of 20.8 million devices as of March 31.

But despite those healthy figures, there's another company that has the largest influence on the Fitbit share price…

I will be live tweeting the Fitbit IPO tomorrow. Follow me on Twitter at @AlexMcGuire92 for constant updates on FIT stock's debut.

More on Fitbit Stock: Fitbit is the most promising tech IPO of the year so far. Its trendy products and strong profitability make it stand out from recent IPOs like Etsy and GoDaddy. But should you invest in Fitbit stock?