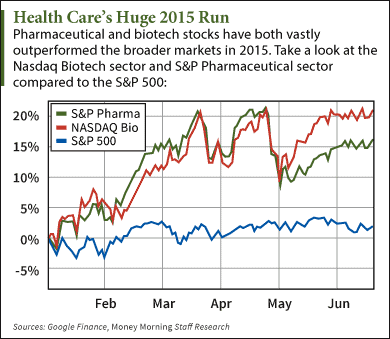 The biggest reason these top pharmaceutical companies are merging is Kythera's newest product, Kybella. It's an injection that eliminates "double chin," or unwanted fat in the chin/neck area. Kybella is expected to reach the market shortly.

Company officials are unsure of Kybella's full potential because it's a brand new market. Kythera's CEO Keith Leonard previously stated the product will be aimed at patients who already receive Botox treatments. That makes Allergan the perfect company to partner with.

This morning's deal is just the latest in this year's massive healthcare M&A market.

According to PricewaterhouseCoopers, the "life sciences" field had 35 M&A deals in Q1 2015. The life sciences industry is made up of pharmaceuticals, medical devices, biotech, diagnostics, and contract-research organizations.

It's a trend that Money Morning Defense & Tech Specialist Michael A. Robinson saw coming, even when Wall Street "experts" called the M&A market dead in late 2014.

Top pharmaceutical companies go on the hunt for smaller firms when their older patents are about to expire. Instead of developing their own drugs - which can take up to 10 years and $1 billion - they buy other companies with new drugs.

In early 2015, Robinson found an investment that taps into this shopping spree of the top pharmaceutical companies. It's already gained 16.7% and will continue climbing from here...