A Jim Rogers gold prediction is taken seriously by investors.

And today (Friday) we got a fresh Jim Rogers gold prediction courtesy of a MarketWatch interview. 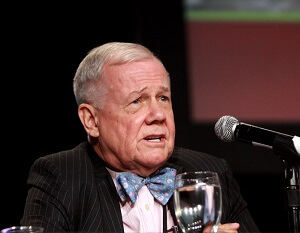 "Gold is in a correction, and the correction has gone on for four years," Rogers said. "Although I am not buying gold, I am expecting an opportunity to buy gold sometime in the next year or two. For instance, if gold goes under $1,000, I hope I'm smart enough to buy a lot more gold."

When Jim Rogers speaks, he is taken seriously by investors - and for good reason.

He achieved legendary Wall Street status with The Quantum Fund, which he and partner George Soros founded in 1970.  It's often described as the first real global investment fund.

Over the next decade, The Quantum Fund gained 4,200%, while the Standard & Poor's 500 Index climbed about 50%. After he "retired" from Wall Street in 1980, he predicted the meteoric growth of China, as well as the rise of commodities.

Rogers is known as one of the yellow metal's biggest fans - but he has a realistic outlook on what affects its price.

"Part of the problem is that many people consider gold to be holy. They are mystical about it. Some mystics are surprised that gold goes down at all," Rogers told MarketWatch.

Rogers has no such illusions. That gold price figure of under $1,000 is based on a long-standing expectation that the gold correction could end up as much as 50% of the $1,885 peak in August 2011.

Jim Rogers' gold outlook is mostly based on history and trends. He told MarketWatch that a 50% correction in a commodity is "normal."

And he told Money Morning in 2013 that the correction was far from over...

Your not going to see $2,000/ounce gold for a long time. Gold bugs keep saying its going to go down more first, but not as long as Central Banks and China are ongoing buyers. The public has NO interest in gold or silver right now. If crime goes up, maybe home vaults will be popular, along with "safe rooms" and "bug-out" redoubts. Confusion reins during the transition as the public runs from one fad to another.

The current buzz is Europe and eventually the U.S. will go "cashless". Banks want total control and digital money fills their bill. Gold may become a black market money but still acceptable around the world. That is not true with the U.S. dollar anymore. Fewer and fewer overseas buyers will want them.

This is, as you said, really useful advice from Jim Rodgers. There is always a lot of speculation on the gold market, and there are certainly no guarantees. However, I have found that modeling my investment patterns after very successful investors tends to serve me well.

Thanks for sharing this advice from Jim Rogers. It is definitely nice hearing his opinion on the gold market at the moment. I better start saving up money so that I can buy some gold next year. Hopefully that will get me in a really good financial position!

This is a very interesting article. It seems like the gold price could correct and rise by as much as 50%. That would mean that now is a good time to invest in gold. Today, it is so simple to buy and sell gold. There are many websites available that bring the best price to you. Thanks for the post!