Editor's Note: Lee Adler has been covering the global markets (without regard to establishment spin-meisters) for nearly 15 years over at the Wall Street Examiner. He predicted everything from the top of the dot-bomb bubble in 2000 to the Crash of 2008. We're sharing this story with you today because Lee has uncovered a critical problem with the U.S. housing market - a problem the Fed is betting we won't find out about...

The seasonally adjusted (SA) headline number for the monthly-error-times-12-annualized version of new home sales in June was 482,000.

Wall Street analysts had guessed that the number would be 550,000. The Wall Street Journal went into apoplectic excuse-making mode, almost foaming at the mouth to try to find pundits to explain away the bad number.

The whole spectacle was silly and pointless since we have actual data and can readily see whether sales remain on trend or not. We don't need Wall Street pundits to tell us what to think.

We can see for ourselves...

The Numbers Look Great... If You Have No Memory

Actual June sales were estimated by the Census Bureau to be 45,000 units, based on their small sample of builders nationally. This number and the headline number are subject to big revisions in subsequent months because the margin of error on the initial release is huge. 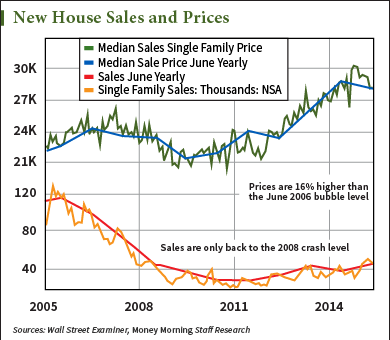 While sales haven't bounced much, the "recovery" in prices has been remarkable. If 2006 was the peak bubble year, with the median sale price in June hitting $243,200, what does that make the current median of $281,800, which is 16% higher? Not a bubble? I'll let you be the judge.

The median price is up 31% since June 2010. But of course house prices don't "inflate." Neither The Wall Street Journal, whose godfather Rupert Murdoch also owns Realtor.com, nor any of the other mainstream media press release repeaters ever use the word "inflate" or "inflation" when it comes to house prices.

We're told to think, "What we don't inflate, you must appreciate!"

The Disappointing Trend Driving This "Growth" 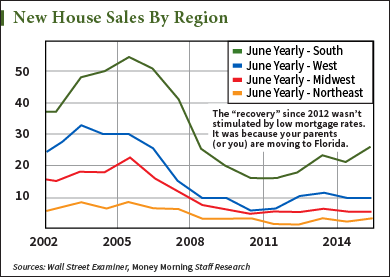 Prices have come down over the past year. Is the bloom off the bubble? Maybe, but the trend won't be broken until the lower channel line, now around $265,000, gives way. We'll keep an eye on that.

Looking under the cover of the headline number, the breakdown of the data is ugly. Virtually the entire year-to-year gain is because of your parents, and maybe you if you're my age, moving to Florida. There were 26,000 sales in the "South" (actually the Southeast). That was 5,000 units, or nearly 24%, above last June, accounting for 58% of total sales. By the same token, even with the recovery, sales in the Southeast were still down 49% from the peak of June 2005.

Other than that permanent demographic trend of retirees moving south, there is no new home sales market.

Would more houses have sold if more were built? I am looking to buy in the existing market in michigan and there are not a lot of houses on the market. Any good ones that become available sell in less than 1 week.

when you sell out to the finance industry – the world of leveraged assets – the biggest beneificiary must be the most wealth, the asset rich.

ZIRP just keeps zombie businesses alive (including banks) while bailing out bondholders – that is institutions, banks, insurance corps, pension companies and of course the better off who hold bonds in their portfolios.

That doesn't provide ordinary jobs, it encourages banks to lend further and they only want to lend to the better off for security – who also want to park their money in assets. Hence the asset price inflation.

The tax system has to first and foremost reward exporters – that makes the country richer.
Instead it rewards paper shuffling while open markets allow unfettered dumping from the far east – taking jobs away. And now the far east is automating, buying german machinery and taking higher value manufacturing away aswell.

Other than Germany who is trying to make the manufacturing model work?

The question is
1. are we right to dismiss manufacturing as a longer term lost cause given global competition and focus on facebook and financing????
2. How can we best exploit opportunities from the emerging markets who surely must hold the key to our trading future?

Until we answer those questions we'll continue with awful finance based bubble blowing economies that hurt the little guy each and every day.

Housing will never flourish with high paying jobs having left the country and the fed throwing money at corrupted banks in lieu of funding real positive productive endeavors.

You are exactly right. The whole ZIRP thing is nothing but a bank bailout claiming to be helping the little guys and the economy. OK so that saves the free world at the cost of everyone else because if the banks go down, our entire system goes down. That probably is true now, thanks to the "too big to fail" philosophy. The truth is the banks got guaranteed money for NOT lending. They no longer do what they were designed to do, which is take in money from depositors at one rate and loan it out to people needing credit at a higher rate. Instead, they take in free money and "invest" in govt guaranteed assets with zero risk. If they can get all the money they want for free and make money at zero risk, why would they ever lend to people who want to build a house or otherwise. The entire system is now non-functional, and that is the fault of the Fed. I expect banks to be greedy, but it is up to the Fed and Congress to limit that, which they have not. I have friends who wanted to build a new house (boost the economy). The bank would only lend them 60% of what the builder was going to charge, so they couldn't build. The reason? Because there were foreclosed properties going for 60 cents on the dollar. Never mind that it actually cost a dollar for a dollar's worth of material in a new house. I will never give BAC, WFC, or any other big banks a single penny of my money. I would rather put it under a mattress.

Why is the free market failing to provide housing at a price my millennial children can afford? Perhaps the answer will explain why the WSJ is so desperately committed to seeing the rosy scenario – reality is putting a real dent in the doctrine that laissez faire capitalism lifts all to greater prosperity. We need a real housing policy in this country.

Another fact that needs to be pointed out is that home ownership is at the lowest level since 1968! Hedge funds scooped up many distressed homes using cheap money. When interest rates start to go up they will be looking to dump properties and reduce debt which will drive down prices. Trouble is brewing!

the Real Estates market is down, zero interest is no help to the average Joe Brown. What is the solution to the problem?