The rise of China, the world's most populous nation, is moving influence and assets from West to East.

And this is having a dramatic effect on the gold market.

China's efforts over the last two decades to modernize and urbanize its economy have created a burgeoning middle and upper class with growing disposable income and net worth.

China has a long-time affinity toward gold. For the past several years, it's consistently been one of the top two gold consumers worldwide. (India holds the title of No. 1 gold consumer - for now.)

China is also the world's largest gold producer. So it stands to reason that China would want to exert more influence over the gold market - and gold prices.

Here's how the Asian nation aims to do just that...

Despite being one of the two largest gold-consuming nations, China still ranks relatively low on a consumption per-capita basis, thanks to its massive population. 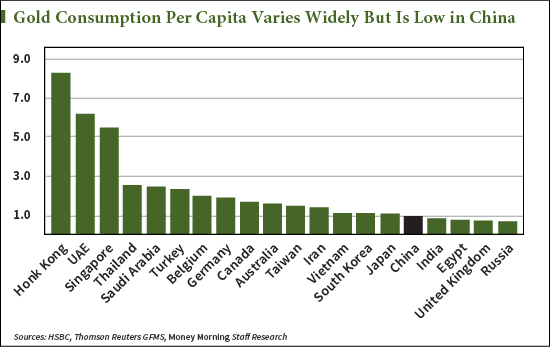 China's gold imports have remained strong, with 2014 being the second-best year for Chinese bullion demand. Imports in 2015 have surpassed five-year averages.

Neighboring countries love gold, too. Indonesia, Malaysia, Vietnam, and other emerging markets don't have the benefit of developed financial services. People there look for ways to shelter their savings from inflation.

According to HSBC analysts, many of these buyers turn to gold because they see it as an "efficient and reliable store of value."

Low per-capita consumption of gold in China is regarded as positive. As HSBC sees it, there remains "significant room for growth."

And that bolsters the case for China's desire, and future ability, to dominate the gold market.

According to Anthem Blanchard, CEO of online gold retailer Anthem Vault, "Given that China is the epicenter of the physical gold market, it does make sense that the Chinese government would want its physical Shanghai gold market to supplant the Comex derivative market (and others) as the primary global price-setting mechanism."

And now is China's chance to take over...

This article makes a lot of sense with the analysis of what is going on with the market. With a recent massive dump on the market that caused weak hands to send gold prices even lower, the Chinese market seems to be asserting its influence over the global gold market through crafty plays and hidden reserves. This type of market control and manipulation is one of the many reasons that some have started to looking towards decentralized solutions for capital management.

Amilabs out of Thailand has been doing this with establishing decentralized gold reserves in multiple countries that are represented by a digital currency. Moving the control of the resources out of the influence of one country or one political sphere is only in the best interests of the market and those looking to protect their commodities from manipulation.

Sorry, old chap, the decision does not rest with China. The decision, when it comes, will come from those 'own' and tightly control the Gold Market, as they have done for centuries. We are only 'custodians' – and that applies whether it is London or New York.

No individual nation you can find on any map has any say in the matter – never has.

Many western economists like Krugman were awed by the craftiness of the Chinese communist money managers just a year ago. We now are seeing that, even with complete state power, they are rank amateurs. These moves will do nothing to help their market and as you note…..will likely start a rush to the bottom. Other countries will not sit by idly while the Chinese once again try to usurp lower rates to THEIR advantage thus screwing everyone else. Not only that……how long will it be before their obvious self interest and greed will turn other countries against all of their selfish moves?

You must be joking about the crafty Chinese. USD, GBP,Euro (Germany), Swiss Franc and Japanese Yen are all manipulated for gain, the Japanese leading the way for now with a large devaluation. The Swiss moves were also massive. Chinese have operated with restraint and small moves. They kept parity with the USD for too long.