The Chinese government made the surprise decision today (Tuesday) to devalue the Chinese yuan. It's an action that could have dire consequences to the U.S. economy.

Today's move was the largest devaluation in the Chinese yuan's history. The yuan's value was cut almost 1.9% against the U.S. dollar. 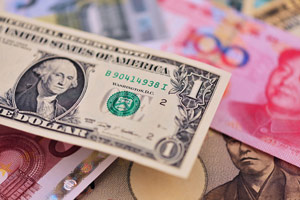 According to The Wall Street Journal, the People's Bank of China (PBOC) believes this will reform the yuan's regulation and more closely align the currency with market forces. The PBOC also followed some of the International Monetary Fund's (IMF) suggestions when it came to changing the currency's regulation.

Here's why that is so important...

Both China and the IMF have been pushing to make the Chinese yuan a global reserve currency. That's bad news for other reserve currencies, particularly the U.S. dollar.

Why a Chinese Yuan Reserve Currency Will Destroy the U.S. Dollar

The CIA's Asymmetric Threat Advisor Jim Rickards has been following this story for years and just revealed that the IMF has a 10-year plan to replace the U.S. dollar as the world's top reserve currency.

According to Rickards, a yuan reserve currency will trigger a transfer of roughly $1 trillion into Chinese assets just in the first few years.

That's so important because much of that $1 trillion will come from the sales of U.S. Treasuries - how most governments hold dollars. When foreign governments start to dump their holdings, U.S. dollars will flood the market. That will cause massive inflation in the United States.

In a recent warning to all Americans, Rickards pointed to an IMF report called "The Dollar Reigns Supreme by Default," which specifically claimed "the dollar status should be in peril."

Here's what is most concerning for Americans. If the IMF is successful in toppling the U.S. dollar, the agency can put itself in charge as the world's monetary system.

In the words of Rickards, it all comes down to "the IMF taking over the world monetary system and becoming the central bank of the world."

With these actions, China and the IMF have taken direct aim at the dollar and the U.S. economy.

And that's just one of five "flashpoints" that will trigger the U.S. dollar's demise. Some of the others are already happening. Continue here to get all the dollar-ending catalysts today...

I don't believe the IMF works against the US. I don't believe China will destroy the US economically because the US is their #1 customer. Even if China does that the US will go to war rather than die ignominiously.

That should be you're, as in you are, not your.

Well the move didn't exactly work well. It almost destroyed the Chinese stock markets.
IMF is not working against the US ….