The Bitcoin price is getting hammered as a result of a contentious and emotional debate over Bitcoin's future.

Just three weeks ago, Bitcoin prices had climbed back to about $295, rising from the mid-$220s of early June. 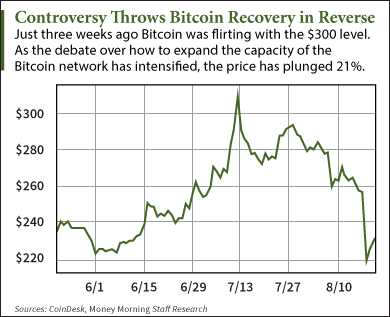 But as the debate over the best way to scale the Bitcoin network to handle the ever-increasing number of transactions has escalated, the Bitcoin price has plunged. The price of Bitcoin is down 21% since July 28.

That news added to the cloud of uncertainty. The Bitcoin price drop deepened and even suffered a "flash crash" on Tuesday.

Centered on the Bitfinex Bitcoin exchange, the flash crash was fed by margin call selling. It briefly dropped the Bitcoin price as low as $179.35, close to the digital currency's lows for the year.

Unfortunately, the dispute seems likely to drag on for weeks, depressing Bitcoin prices for as long as it lasts.

While some within the larger Bitcoin community have taken sides, others are worried the civil war is a threat to Bitcoin's future, even its very existence.

So what's this all about, anyway? It has do with how Bitcoin is structured.

Everyone agrees that Bitcoin needs to be able to handle a lot more transactions per second to become practical. In fact, it's expected that if nothing is done, Bitcoin will hit a wall next year or by 2017 at the latest.

The dispute is over how to do it...